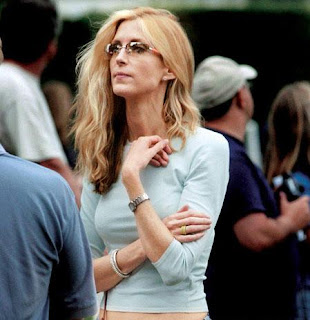 Ann Coulter:
If I were a fire breathing anti-West Muslim
I would have been allowed to speak
Regardless of your opinions of Ann Coulter, shutting down a speaking event where she was scheculed to speak was stupid. If you have opinions that are not shared by the political elite, you run the risk of being silenced, that’s what happened yesterday in Ottowa Canada, pure and simple.
The leftists hype the fact that she told Muslims to take a flying carpet or use camels instead, so what? What are we to say about comedians who use similar, or worse language than Ann? Shut em down? People who don’t understand anything about what free speech is, are the very ones who want to shut down anything “they personally don’t like to hear”. You either have free speech or you don’t. KGS

Free speech for them but not for Ann
Blazing Cat Fur: What a disgrace to Canada but what can you expect from a University that promotes Israeli Apartheid Week. The U of Ottawa was all free-speechy when this hypocrite spoke at Whack-A-Jew-Week.

OTTAWA – It’s just the thing conservative author, commentator and self-described polemicist Ann Coulter is known for: Dividing her audiences.
Coulter was scheduled to speak before an audience gathered at the University of Ottawa’s Marion Hall Tuesday evening.
Instead, security concerns raised by the university kept the Republican firebrand from speaking.
Organizers pulled the plug on the speaking engagement because there were just too many people — too many of whom were just too rowdy.
“At a university, instead of free speech, censorship,” said Ezra Levant, a Canadian conservative writer, lawyer and blogger who was scheduled to introduce Coulter.
Coulter was at the university for the second stop of her Canadian speaking tour to dish on political correctness, media bias and freedom of speech.
Police were called by the university to assist after students of all political stripes descended upon the auditorium to hear the talk — some of them lining up for more than two hours in the rain — only for it to be cancelled a half-hour after it was due to begin.

Ann Coulter’s speech at the University of Western Ontario (22.03.10)