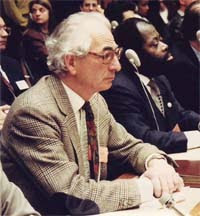 David Littman: Excuse me UNHRC,
but Hamas is a genocidal terrorist group
David Littman, human rights activist, friend of Israel and of the Tundra Tabloids, sends the TT the following speech he delivered yesterday at the UN Human Rights Council, concerning the Hamas’ implicit calls for the destruction of Jews and the state of Israel, and the Goldstone Report’s refusal to address it.
Mr.David Littman stands head and shoulders above many of the people who use the UN for their own deceitful purposes, being a true humanitarian in the traditional sense of the word. The UN has bastardized the meaning of human rights and it’s only people like David who hold them to acount for their miserable actions.
Hats off to Mr.David Littman, may he never tire in his endeavor to hold the feet of the international community to the fire, by keeping them aware of their gross double standards towards Israel, and how that gross double standard effects the lives of those who live in states who really do need the help of the international community. KGS
UN HUMAN RIGHTS COUNCIL – 13th session (1 – 26 March 2010)

[Thank you, Mr. President. Five months ago at the 12th special session, the Council adopted a follow-up resolution on the Goldstone-Gaza Report sponsored by the OIC (Organization of the Islamic Conference), the NAM (Non-Aligned Movement) & the African & Arab Groups – with the usual automatic majority] which stresses: “that the right to life constitutes the most fundamental of all human rights.” A/HRC/S-12/L – 14 October 2010]
Sir, we wish to stress again that the “right to life” is contradicted by a blatant omission in the 452 page Goldstone Report [A/HRC/12/48], which is the root cause of the Gaza tragedy. I am referring once again to the Hamas Charter which simply calls for Jews to be killed and Israel to be eliminated; a text which, like Mein Kampf, refers at length to a crude forgery [The Protocols of the Learned Elders of Zion]; a text that inspires a Jihadist-terrorist regime – with links to Hezbollah and Iran – to teach systematically a culture of hate and death to children and adults in schools, the media and on TV. We recommend last week’s Report by MEMRI,1 which provides scores of links to Hamas-controlled Al-Aqsa TV clips that show how Gaza children are taught to become ‘Jihad martyrs’, while killing Jews and anyone near them. These bloodthirsty TV ‘shows’ are there for all those with eyes to see and ears to hear.
[The titles are clear: “Dispatch those sons of apes and pigs to the hellfire on the wings of Qassem rockets” / “The Jihad against the Jews will continue until their annihilation / A Palestinian who kills one Jew will be rewarded as if he killed 30 million / Killing all Jews will not be satisfactory compensation for the ‘Real Holocaust’ in Gaza. On this visual irrefutable evidence, the U.S Treasury Department last week imposed sanctions on Al-Aqsa TV. Officials from the UK, France, Germany, Italy… have been briefed on all this. (MEMRI, also PMW; and Intelligence & Terrorism Information Center:

‘Response to the Goldstone Report: ‘Hamas & the Terrorist Threat from the Gaza Strip’ (2)

Sir, millions of Germans (not just Nazis) read Hitler’s Mein Kampf – his Aryan ‘struggle’ mainly against Jews that led to the monstrous ‘final solution’– but very few others persons worldwide felt concerned by such incitements. Today, there is also little interest shown in this genocidal Hamas Charter, a Jihad / ‘struggle’ to kill Jews and wipe Israel off the map (with help from all and sundry), which we have been denouncing here since 1989 in vain. Few have bothered to read how Jews, Judaism and Israel are targeted:

[“Israel, Judaism and Jews challenge Islam and the Muslim people. ‘Let the cowards never sleep.’” (Article 28), or that Article 7 quotes a ‘saying’ (hadith) still widely preached in talks and sermons worldwide that call on Muslims to fight & kill all Jews; 3

and that article 8, the Hamas ‘slogan’, is taken from the Muslim Brotherhood Charter, inspiring ‘Jihadist Martyrdom Bombers’ worldwide, and including U.S. convert ‘Jihad Jane’; 4 and that the preface quotes its founder Hassan al–Banna’s politicidal call: “Israel will exist & continue to exist until Islam will obliterate it, just as it obliterated others before it.” Cf. written statements. 5]

[1st time quoted by David G. Littman at the 45th session, Commission on Human Rights, 31st January 1989]
Mr. President, we would ask: how can Judge Goldstone, his colleagues, the Secretary-General, the High Commissioner for Human Rights, UN officials, UNESCO, UNICEF, the OIC and this Council, and the ‘international community’ willingly ignore such blatant calls for children to kill [a “direct and public incitement to commit genocide” that are punishable under articles 3 and 4 of the 1948 Genocide Convention] and shrill defamations of religion: Judaism – all in the name of Allah and of Islam, while the Council prepares to adopt another resolution on “Combating Defamation of Religions” [first initiated in 1999 by the OIC]?
Sir, future historians will ask: why this weird silence; this eerie faculty for forgetfulness of past and planned horrors via direct and public incitement to both politicide and genocide? Next week Christians will celebrate Easter and Jews Passover – the Exodus from Egypt to the Promised Land of Israel [Cf. Koran, The Table, Surah V: 23-26], followed by the official Shoah / Holocaust Remembrance Day on 11 April. Now is the time, sir, for this Council to denounce all this and the Hamas Charter and not keep silent – while seeking true peace rather than one more ‘resolution’. A last word from Shakespeare’s Othello: “Silence that dreadful bell.” [II. iii. 175]
Thank you, Mr President.
1. http://www.memri.org/report/en/0/0/0/0/0/0/4045.htm  / MEMRI: Hamas. Special Announcements N° 107 (18 March 2010)
2. http://www.terrorism-info.org.il/site/content/t1.asp?Sid=13&Pid=334
3. “HAMAS aspires to implement Allah’s promise, whatever time it may take. The Prophet, prayer and peace be upon him, said: ‘The Hour [Day of Judgment] will not come until Muslims will fight the Jews and kill them; until the Jews hide behind rocks and trees, which will cry: O Muslim O Abdallah [slave of Allah], there is a Jew behind me, come and kill him. This will not apply to the Gharqad tree which is a Jewish tree.’”
4. “Allah is its target, the Prophet is its model, the Koran its Constitution; Jihad is its path, and death for the sake of Allah is the loftiest of its wishes.” (Article 8).This ‘saying’ – from the 1928 Charter of the Muslim Brotherhood, of which Hamas is a wing, according to its 1988 Charter, article 2 – is recorded from al-Bukhari and Muslim, both considered by serious Islamic scholars as highly reliable sources for the hadith or ‘sayings’ of the Prophet Muhammad.]
5. See detailed written statement E/CN.4/2003/NGO/226: The 1988 Genocidal Charter of HAMAS: an evil legacy for ‘Jihadist- Martyrdom’ bombers. See also: A/HRC/S-1/NGO/4 (2006);A/HRC/S-9/NGO/3 (2009)

Here’s a clip of Mr.David Littman doing what he does best, under the most annoying and intimidating circumstance: confronting Islamic anti-Semitism at the UNHRC. Mensch.