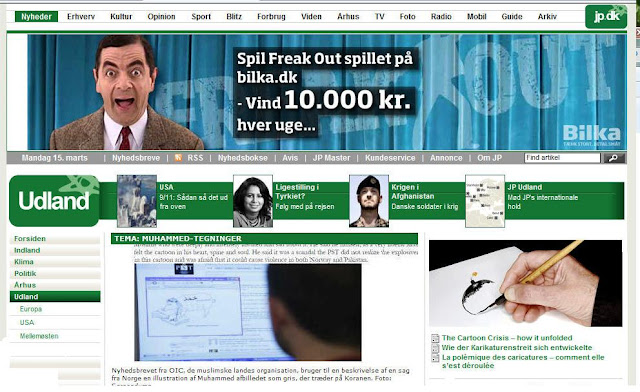 Remember folks, the Tundra Tabloids had it first, and then it started to be picked up by others as word got out. This is bound to get the OIC’s attention, the TT’s sure that someone is going to try to get a statement from them. This is going to get interesting, are they going to let it ride, or shove it down the memory hole? KGS

NOTE: It’s great to know that the Jyllands-Posten reads the Tundra Tabloids!

Organization of the Islamic Conference OIC is doing what the Western media was blamed for: Using cartoons to illustrate a news story. Naser Khader: It is historic.

While Muslim organizations have announced that they will drive a witch hunt in the Danish newspapers, if they do not apologize for having published the Muhammad cartoons, the global organization of the Islamic world, the OIC, does not hesitate to publish a Muhammad cartoon to illustrate a news story.

This is the case in the February edition of the OIC’s monthly newsletter in February on cultural and social affairs.

The newsletter is sent from the “Office of Islamophobic sightings,” and in the chapter “adverse events” where the “newspaper-case from Norway is briefly summarized, and used the image of Mohammed as a pig, which is on the Koran, as the accompanying illustration.

The image was first published in early February on the front page of the Norwegian newspaper Dagbladet, which printed cartoons of Mohammed to illustrate a case of the Police Security Service (PST) in Norway, which had the link to the controversial cartoons on his Facebook page.

The case triggered massive demonstrations among Muslims in Norway and widespread criticism within the Muslim community to “abuse of freedom of expression.”

Among others, there was a request to precisely OIC from Suhaib Hassan of the Islamic Sharia Council of the UK.

“The 57 Muslim states must put pressure on Norway and Denmark to get them to stop such foolish and insulting drawings” was accompanied by a requirement for Muslim countries to withdraw their ambassadors from Denmark and Norway.

Conservative Spokesman of immigration policy Naser Khader calls the use of images of historical as well as a double standard.

As far as I know, it is the first time you get such a controversial Mohammed drawing from an official body. This drawing will indeed offend devout Muslims far more than the original cartoons. If a critical Arabic newspaper printed it, would the editor be sacked and probably jailed. The original drawings were never officially shown, “says Naser Khader to jp.dk.

He adds that he is convinced that it’s not an error.

“It looks like a paradigm shift. There must be an agenda behind it. The OIC after all, is trying to prove its legitimacy as the body that defends Muslims throughout the Muslim world. It will show that Muslims are under attack. But it is hypocritical that they would need to show such a drawing, but others may not, “says Khader.

It has not been possible to get a comment from the OIC, which has its headquarters in Jeddah, Saudi Arabia.

UPDATE: The Swedish newspaper picks up the story as well.