Skip to content
Home
/
2010
/
March
/
15
/
Building a house in J'lem
/
AMBASSADOR TO US: WORST CRISIS WITH WASHINGTON SINCE 75’…….
Facebook
Twitter
Google+
LinkedIn
Pinterest
A POWERFUL LEADER DICTATING TO JEWS,
WHERE HAVE WE SEEN THAT BEFORE? 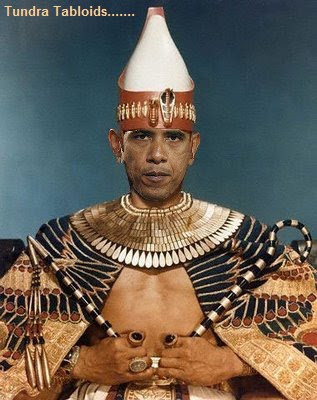 Obamatut: I’ll tell you Jews
where you can live…
This has been forwarned. The point about Netanyahu’s lack of judgment is a moot one. Given the current US administration’s far reaching agenda, the implementation of a Palestinian state by hook or crook, coupled with the sheer amateur hour approach by Obama from the very git-go, it was only a matter of time before the US started to hang Israel out to dry, it was just a question of when. The Tundra Tabloids has been sounding the alarm about Obama and his key advisors’ anti-Israel animosity for almost two and a half years, now we see it begin to bite.
[If the United States State Department felt insulted by Israel building homes in Jerusalem, let me make it clear that I feel no less insulted by the United State State Department when they tell me that I can’t build a house in Jerusalem because I’m Jewish.]
Oren: Worst crisis with US since ’75
Israel’s ambassador to Washington Michael Oren convened Foreign Ministry consuls for an emergency briefing, and told them the crisis between Israel and the US is the worst since 1975, Army Radio reported.

Oren was referring to a crisis that evolved when Israel refused to sign a treaty to withdraw forces from Sinai in 1975.
In an unusual move, the American Israel Public Affairs Committee (AIPAC) made a public call on the White House to tone down the rhetoric. The lobby said statements made by senior officials in US President Barack Obama’s administration were “very worrying.”

The crisis erupted late last week when the Interior Ministry announced the building of 1,600 housing units in the Jerusalem neighborhood of Ramat Shlomo, while US Vice President Joe Biden was visiting Israel.

The US administration refused to let go of the issue, even after Prime Minister Binyamin Netanyahu apologized to Biden and Biden said the apology was accepted.
AIPAC said the White House should avoid public demands and unilaterally setting a timetable for Israel to follow.

In his briefing to consuls, Oren said the crisis with the US is of “historic” proportions.

The US reportedly wants Israel to announce that it’s cancelling the Ramat Shlomo project, investigate how the project came to be announced when Biden was here, and make gestures towards the Palestinian Authority. The US also reportedly demands that Israel publicly announce that all core issues will be discussed during negotiations.