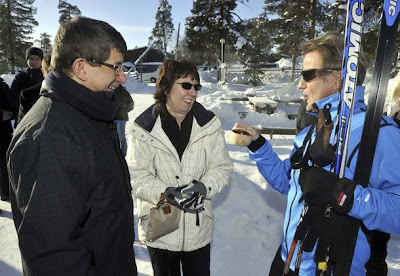 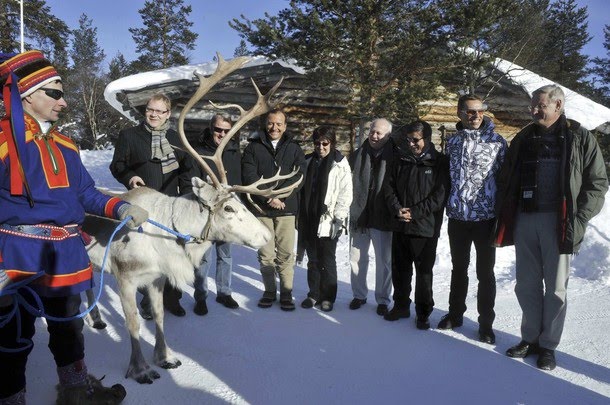 [FM Urmas Paet of Estonia, Bernard Kouchner of France, Franco Frattini of Italy, EU high representative for foreign affairs and security policy Catherine Ashton, Miguel Angel Moratinos of Spain, Ahmet Davutoglu of Turkey, Alexander Stubb of Finland and Carl Bildt of Sweden pose with a reindeer.]
For Finnish FM A.Stubb, what’s of most importance is getting Finnish bureaucrats positions inside the bureaucratic monstrosity of the EU, not the trashing of the Finnish constitution by the acceptance of the Lisbon Treaty (the formely rejected EU constitution by a new name).
One Tundra Tabloid reader reminds the TT that the highly unpopular and failed former SDP Finnish Foreign Minister, Erkki Tuomioja (Old Scruffy) was the one, along with the Leftist Finnish President, Tarja Halonen who started all this “unfortunate anti-Israel, Pro-Turkey Finnish politics.”

“Posta-Journal reports that, despite the remote northern location, Finland is open to other cultures, it also is one of the countries most supportive of Turkey’s EU membership. On October 3 in Luxembourg, Finnish President Tarja Halonen praised Turkey’s reforms, and said that the Turkish future accession to the EU will enrich the community.
Finland has a particularly important role in Turkish-EU relations. Even though Finland is not one of the bigger EU countries, it is respected and its consistent foreign policy line has established itself as a larger size by the state, continue Posta Journal’s article.
The article explains that a decision on Turkey’s EU membership application was made in 1999, the Finnish EU Presidency. In other words, Turkey’s path to the EU began in Helsinki. “

Turkey: A Threat, Yet Again

[…] The neo-Ottoman strategy was clearly indicated by the appointment of Ahmet Davutoglu as foreign minister almost a year ago. As Erdogan’s long-term foreign policy advisor, he advocated diversifying Turkey’s geopolitical options by creating exclusively Turkish zones of influence in the Balkans, the Caucasus, Central Asia, and the Middle East… including links with Khaled al-Mashal of Hamas. On the day of his appointment in May Davutoglu asserted that Turkey’s influence in “its region” will continue to grow: Turkey had an “order-instituting role” in the Middle East, the Balkans and the Caucasus, he declared, quite apart from its links with the West. In his words, Turkish foreign policy has evolved from being “crisis-oriented” to being based on “vision”:
“Turkey is no longer a country which only reacts to crises, but notices the crises before their emergence and intervenes in the crises effectively, and gives shape to the order of its surrounding region.” He openly asserted that Turkey had a “responsibility to help stability towards the countries and peoples of the regions which once had links with Turkey” — thus explicitly referring to the Ottoman era, in a manner unimaginable only a decade ago: “Beyond representing the 70 million people of Turkey, we have a historic debt to those lands where there are Turks or which was related to our land in the past. We have to repay this debt in the best way.”
This strategy is based on the assumption that growing Turkish clout in the old Ottoman lands — a region in which the EU has vital energy and political interests — may prompt President Sarkozy and Chancellor Merkel to drop their objections to Turkey’s EU membership. If on the other hand the EU insists on Turkey’s fulfillment of all 35 chapters of the acquis communautaire — which Turkey cannot and does not want to complete — then its huge autonomous sphere of influence in the old Ottoman domain can be developed into a major and potentially hostile counter-bloc to Brussels. Obama approved this strategy when he visited Ankara in April of last year, shortly after that notorious address to the Muslim world in Cairo.
Erdogan is no longer eager to minimize or deny his Islamic roots, but his old assurances to the contrary — long belied by his actions — are still being recycled in Washington, and treated as reality. This reflects the propensity of this Administration, just like its predecessors, to cherish illusions about the nature and ambitions of our regional “allies,” such as Saudi Arabia and Pakistan.