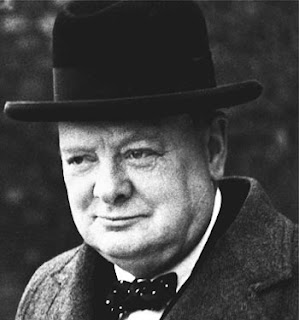 Winston Churchill: Well Judith Klinghoffer,
that makes me an “extremist” as well
Bostom: Winston Churchill in his book From War to War, proclaimed Hitler’s Mein Kampf to be, “the new Koran of faith and war: turgid, verbose, shapeless, but pregnant with its message.”
People like Judith Klinghoffer, who take to defining those who are placing their own lives at risk, like the Dutch PVV party spokesman, MP Geert Wilders, as “extremists”, are doing themselves and Europe no favor whatsoever. Klinghoffer’s article was published at HNN:

[…] I believe the recent electoral success of Geert Wilders may have something to do with the Swedish media developing a sudden spine. The liberal/leftist power elite may be looking at what is happening in traditionally very liberal Netherlands and realizing that if they fail to stand up to Islamists intimidation, the people will replace them with extremists who would. And, yes, I call a person who compares the Koran to Mein Kampf, an extremist.

Ms.Klinghoffer is weaving this scenario entirely out of whole cloth here. Clearly, there is no visible link between Geert Wilders’ PVV party’s recent electoral successes, and the Swedish MSM showing of spine in the defense of Lars Vilks. What is more likely the reason, than not, for Swedish press’ overwhelming response, is due to this being an international plot with bona fide jihadists and that it seemed more “real” than the lone idiot Bosnian woman who first threatened Vilks. It’s the gravity of the situation, not Wilders, that’s behind it.

As for her quip about extremism, many a Western politician and scholar well enough versed about Islam and the Koran before the dawn of political correctness, would be labeled as an “extremist” by this woman, including Winston Churchill. For Klinghoffer (and for the Finnish court that convicted Finnish truth teller, Jussi Halla-aho), truth is not a defense.

So by her own reasoning, she must willing to call Ayaan Hirsi Ali, Nonie Darwish, Wafa Sultan, Ibn Warriq and any other former Muslim who risks their lives to dare spill the beans on the ideology Islam….”extremists”. The absurdity of Judith Apter Klinghoffer’s position proves her to be an ignoramus on the subject, and that makes her a laughing stock. KGS

NOTE: Please do read Diana West’s post on this as well: A whole lot has changed at FOX News, folks.