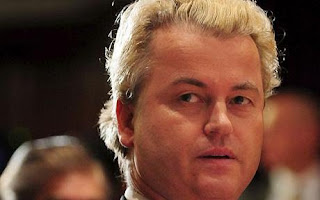 A comment to the following article goes to the heart of the issue, the demonization of a true liberal and champion of the individual, (Wilders) by those who have turned their backs on both their Dutch history and culture.
It can’t be helped but to notice the disdain for Wilders by the journalist writing the article, calling the man a “far-right” politician is a standard tactic by those who disagree with his political points of view. KGS
Comment: [The one ironic thing is that the liberals who dislike wilders are the very people who’s classical ideology he preaches. but todays liberal is far from the freedom loving individual of one hundred years ago, todays liberal is more often than not a self-loathing progressive who licks the boots of anyone who is not of the western world/civilization.]

Geert Wilders returns to Britain, looking for a fight

Boyish, topped with a bouffant mane of bleached blond hair, cheerful and cherubic, Geert Wilders is the unlikely new face of the far Right in Europe. But appearances are deceptive. The leader of the Dutch anti-immigration Freedom Party has emerged as one of the most divisive politicians in Europe, the purveyor of a virulent brand of anti-Islamic rhetoric that calls for a tax on Islamic headscarves and a ban on the Koran, which he likens to Mein Kampf.
Mr Wilders is facing trial in a Dutch court for “inciting hatred”. Last year he was banned from Britain and turned away at Heathrow when he arrived here planning to show his short film, an incendiary anti-Islamic diatribe that the Dutch Prime Minister described as serving “no purpose other than to offend”.
On Friday, after successfully appealing against the Home Office ban, Mr Wilders will return to Britain at the invitation of the UK Independence Party (UKIP) to show his controversial film to an invited audience at the House of Lords. The English Defence League is expected to demonstrate in his support and Muslim groups are all but certain to mount protests.
To his enemies, the 46-year-old Dutchman is an old-fashioned racist demagogue in a new suit; a bottle-blond bigot. To his growing ranks of supporters he is a champion of free speech, a bulwark against what he calls “the Islamic invasion of Holland”. He may be dismissed by some as a crank but he is an increasingly powerful and popular one. On February 20 the Dutch centrist coalition Government collapsed, deeply divided over keeping troops in Afghanistan, paving the way for a general election in June in which the Freedom Party is expected to do extremely well. Polls suggest that the party will triple its tally of seats, becoming at least the second-biggest parliamentary party and quite possibly the overall winner. Mr Wilders is likely to be a key player in any coalition, with a profound impact on the political agenda.