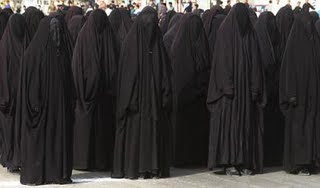 A black sea of ghosts
As they should. Not only is it a symbol of oppression, it’s a security risk. KGS

More than half of voters in four other major European states back a push by France’s Nicolas Sarkozy to ban women from wearing the burka, according to an opinion poll for the Financial Times.
As Mr Sarkozy presses ahead with plans to ban the wearing of the burka in public places, the FT’s latest Harris poll shows the move is not just strongly supported in France, but wins enthusiastic backing in the UK, Italy, Spain and Germany.
The poll shows some 70 per cent of respondents in France said they supported plans to forbid the wearing of the garment which covers the female body from head to toe. There was similar sentiment in Spain and Italy, where 65 per cent and 63 per cent respectively favoured a ban
The strength of feeling in the UK and Germany may seem particularly surprising. Britain has a strong liberal tradition that respects an individual’s right to full expression of religious views. But here, some 57 per cent of people still favoured a ban. In Germany, which is also reluctant to clamp down in minority rights, some 50 per cent favoured a ban.
“This poll shows that the number of people in France opposed to the burka is going up and that is the product of debate on burka and national identity,” said Professor Patrick Weil, an expert on national identity at the University of Paris-Sorbonne. “But the figure is clearly going up in other countries in Europe like the UK as well, and that reflects the growing concern that there is about this issue in some parts of Europe.”
Read more here.