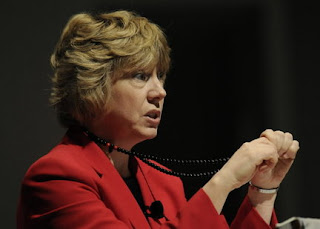 Gracia Burnham:
“People in America don’t understand,” she said.
“Their basic goal is world domination.”
A Tundra Tabloids proverb: “Seeking to reform a jihadi with yet more Islam, is akin to treating an alcoholic with whiskey I.V. drips.”
Thankfully there are brave missionaries daring to do the what the US government and other Western states refuse to do, that is, challenge Islam. The US, as well as other governments are presently locked in the failed policy of denying that the jihadis are actually following Islamic precepts. The thinking goes, that if you deny this, the jihadis will be relegated to the far fringe of Islamic society by the rest of the Muslim community, thereby strengthening the hand of the “moderates”.
Yeah, riiiiight. All that rests upon the premise that “mainstream” Islamic precepts doesn’t dovetail with the views of jihadists in al-Qaida or Abu Sayyaf. How many times have we seen well respected imams and sheiks in the Islamic world, issuing Islamic decrees, edicts and sermons that raise the hair on the back of one’s neck? Besides, we’ve seen the shrug of the shoulders of the so called moderates, who are more interested in protecting Islam, than in countering the message of their co-religionists.
We know not to expect nothing from the camp of these Islamic moderates apologists, so it’s going to have to be people like Gracia Burnham, Nonie Darwish, Wafa Sultan and Ibn Warriq (and a host of others like us in the Counterjihad) that are going to have to challenge Islam on a daily basis, challenging and changing Islam is just not going to happen any other way. KGS

Missionary recounts story of captivity by Muslim extremists in Philippines

Held hostage for 376 days by the Islamic terrorist group Abu Sayyaf in the Philippines, Gracia Burnham doesn’t seem to tire of recounting the time she and her husband spent in the jungle with their kidnappers.
It was the last year of her husband’s life.
Burnham conducted a three-day lecture series this week at Southeastern Bible College, discussing mission work, terrorism and her personal experiences.
“I’ve been surprised our story keeps enduring,” Burnham said in an interview.
[…]
Three of the Abu Sayyaf, including two she has corresponded with in prison, have converted to Christianity, Burnham said. “That’s what I’m hoping for,” she said. “They need Jesus.”
She focuses on forgiveness for those who held her and her husband as captives.
“I think it’s a person’s individual responsibility to forgive and love,” Burnham said. “That’s what Christ teaches us.”