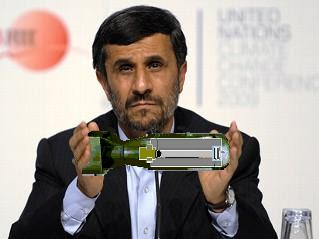 Me thinks they’re worried bout this.
This guy is hoping for a conflagration with Israel, what better way to take the publics mind off his evil regime than to do battle with the Jewish state, at least that’s how he views it. It wouldn’t surprise the Tundra Tabloids if Iranian dissidents, you know, the real supporters of normal governance in Iran, stand up to the regime even during an Israeli bombardment campaign against the Mullahs’ nuke program, and thank “the Zionists”. KGS
Israel mulling a spring or summer war: Ahmadinejad
President Mahmoud Ahmadinejad said on Tuesday that Iran’s arch-foe Israel was mulling starting a war “next spring or summer” but has yet to make a final decision.
Without specifying whom would be targeted, Ahmadinejad said: “According to information we have they (Israel) are seeking to start a war next spring or summer, although their decision is not final yet.”
“But the resistance and regional states will finish them if this fake regime does anything again,” the hardliner said at a press conference when asked about ongoing efforts to reconcile ties between Arabs and Israel.
The already deep-seated enmity between Iran and Israel have deteriorated since Ahmadinejad became the president, with the latter not ruling out a military strike against Tehran’s nuclear sites in a bid to stop the Islamic republic’s galloping atomic programme.
Israeli Prime Minister Benjamin Netanyahu dismissed Ahmadinejad’s claim of a war during a visit Tuesday to Russia.
“We are not planning any war,” Netanyahu said in Moscow following talks with Russian Prime Minister Vladimir Putin.
“They are doing different manipulations,” Netanyahu said.
“I would not be surprised if these things we are hearing now are… (the) result of the Iranian feelings ahead of the impending United Nations Security Council discussions on sanctions,” he added.