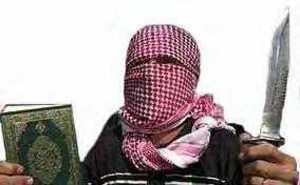 Gee, I wonder what inspired him?
Stone and tree hadith 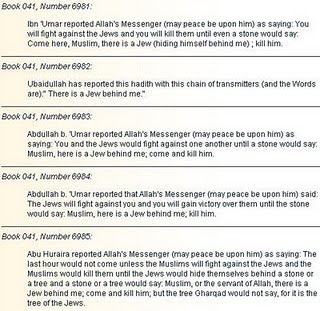 The Tundra Tabloids covered the Michael Oren lecture, in which Muslim “green shirts” tried their best to heckle and derail the main speaker, who happens to be Israel’s ambassador to the US. The Muslim morons finally marched out of the lecture hall, but at least no shouts of “slaughter the Jews” was heard, though they might have been muttering it under their breath.
This is it in a nutshell, the more these non-mild Muslim people are coddled and placated, the more they feel free to intimidate. There has to be a no-nonsense approach to any and all of their anti-Western behavior, whether it’s in the form of verbal threats or stealth jihadist activities.  KGS
[Israel’s diplomats overseas, meanwhile, must counter the attempts to delegitimize the country. “The combination of a large Muslim community, a radical left, influential, English-language media and an international university center make London fertile ground for Israel’s delegitimization,” says Ron Prosor, Israel’s ambassador in London.
Prosor gives many interviews to the British media and lectures at university campuses throughout the country. Although he says he has encountered anti-Israel demonstrations on almost every campus, Prosor has told his people to increase their campus activity. “What is now happening in London universities will happen, at most, in five years at all the large universities in the United States,” he says.]

University student shouts “Itbah Al-Yahud” at Danny Ayalon during lecture.
British police are investigating the verbal attack on Deputy Foreign Minister Danny Ayalon after an Oxford University student shouted “slaughter the Jews” during a talk he gave at the university on Monday night.
During the event, hosted by the university’s Student Union, a Muslim student, who had been heckling the deputy foreign minister, got up and shouted in Arabic “Itbah Al-Yahud” – “slaughter the Jews” as he was leaving the lecture hall.
The incident was referred to the police on Tuesday. Thames Valley Police confirmed on Wednesday that they had received a complaint and were considering a charge of racially aggravated public disorder.
A police spokesman told The Jerusalem Post they were taking the matter “very seriously,” that they were at the very early stages of investigation and that no arrests had yet been made.
The university has promised to look into the incident once the police have completed their investigation.
“Our policy is always to await the outcome of police investigations where criminal offenses are alleged, and to look at any internal disciplinary process after the police have finished their investigation,” an Oxford University spokesperson told the Post. “So we will await the outcome. We abhor racism but obviously now this is in police hands we cannot comment on the individual case.”
The Oxford University Student Union released the following statement condemning the disturbances at the event and distancing itself from the individual.
“Whilst the vast majority of the audience behaved in an orderly and responsible fashion, some members continually interrupted the speech and one individual in particular appears to have made a directly anti-Semitic remark. These individuals exceeded the principles of free speech that the Society upholds. They and their remarks are not representative of this Society, nor the vast majority of the audience. The Oxford Union will not tolerate this kind of behavior by its members.
“The president of the Student Union, Stuart Cullen, has launched an investigation to identify the members who disrupted the event.
“The Union will be taking disciplinary action against these members, in accordance with the Society’s rules. The president praised the work of the security and local police on the night and expressed his gratitude for their help, as well as that of the Israeli embassy, in coordinating the event.