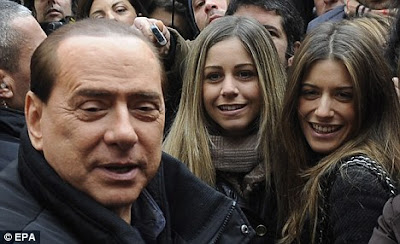 HAHAHA. Finns are still steaming from his cracks about Finnish food. Everyone lighten up, and enjoy. KGS

Italian Prime Minister Silvio Berlusconi was under fire tonight after claiming Italy would only accept immigrants who were ‘pretty girls from Albania’.
The 73-year-old politician made the remark during a meeting with Albanian counterpart Sali Berisha at a summit and his guest was left visibly uncomfortable by the joke.
The two, who had just held talks on the number of Albanians allowed into Italy, were speaking at a press conference in Rome when Berlusconi said: ‘We will only accept pretty girls from Albania.’
The Italian Premier, who is in the middle of a divorce battle with estranged wife Veronica Lario, 53, also joked with photographers: ‘You know I am single now.’
Opposition MPs immediately condemned the politican’s comments. Paola Pellegrini said: ‘Once again Berlusconi just doesn’t give up on his barracks humour.
‘Even in the face of tragedy such as immigration by desperate people, from in this case Albania, the Prime Minister repeats his obsession with woman reduced to fresh meat to be consumed.’
Ms Pellegrini added: ‘He is an indecorous old man who pretends to lead a country which has been subjected to the propaganda of his television and newspapers.’
It is not the first time that Berlusconi has caused controvery with his comments,
In 2003 he caused outrage when he said German MEP Martin Schulz reminded him of a concentration camp guard.
Last year he raised eyebrows by calling U.S. President Barack Obama and his wife Michelle ‘suntanned’.
Read more: