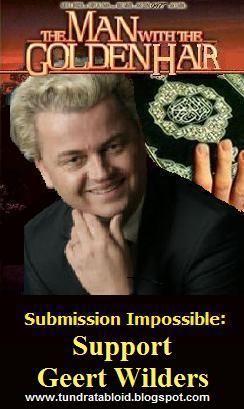 Geert Wilders has been invited to show his short film Fitna in the House of Lords on 5 March 2010.

The purpose of this rally is not to attack Islam or Muslims, but rather to show support for Geert Wilders and to celebrate the achievements of Western Civilization. Namely Democracy, Free Speech and Human Rights.
Just under a year ago the Labour Government barred him entry to the country after Nazir Ahmed threatened to bring 10 000 Muslims to besiege the Houses of Parliament. To censor opposing views in a democracy is a moral outrage and suggests an inclination towards tyranny and appeasement on the part of the Government. Of course the Government was subsequently forced to remove this ridiculous ban and now Geert Wilders can finally get to show his film in the House of Lords.
In Holland the latest attempt of the Dutch ruling class to keep Wilders from office has begun, Mr. Wilders is on trial in the Netherlands for telling the truth. This trial will have unparalleled significance for the future of Europe. It is not just about whether our culture will survive, but whether we are even allowed to state the fact that it is being threatened.
Mr Wilders visit will be only a couple of months prior to the expected British general election, and the issue of Islamization is something that many in Great Britain are acutely concerned about. Hopefully, his visit will help break the taboo about discussion of Sharia in Great Britain and encourage an open and honest debate on the subject in the run-up to the General Election.
Show your support for Geert Wilders, Democracy and Free Speech by attending this rally on the 5th March 2010.