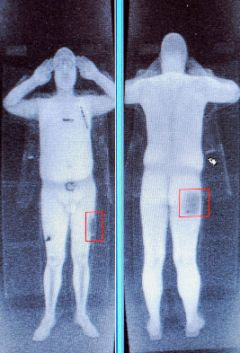 Looks like a muezzin in action
NOTE: An excellent comment from Dallas: “Simple solution… if you don’t like it you don’t have to fly. Use a camel instead. “

How much do you want to bet that the airport authorities will only use it on those it was never meant for? KGS

TERRORISM: TUNISIA, GRAND MUFTI CALLS BODY SCANNER SACRILEGE
(ANSAmed) – TUNIS, JANUARY 25 – Body scanners to help prevent terrorist attacks are “a sacrilege and profanation in the eyes of all monotheistic religions and positivists,” according to the Mufti of Tunisia, Sheikh Usman Batikh, in a recent interview reported by weekly magazine Tunis Hebdo.
According to Batikh, “body scanners will not stop the violence nor will they stop terrorism, and making travellers, both male and female, undergo these examinations, which reveal their private parts and violate their freedom, is unethical and immoral. It is sacrilege and a profanation in the eyes of all monotheistic religions and positivists.
It is a despicable against humanity, which has been chosen and placed above all living things by God, since only humans are covered and dressed in order to be respectable and to be respected.” The Mufti also underscored that there are other methods to fight terrorism. Tunis Hebdo wrote that “numerous Arab countries have demonstrated their displeasure and lack of satisfaction regarding the new regulations issued by the U.S. against their fellow nationals residing abroad, in countries such as Algeria, Saudi Arabia, Syria and Lebanon.”