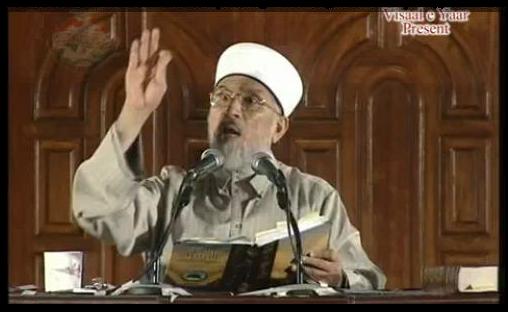 Dr Muhammed Tahir-ul-Qadri:
Killing innocent civilians is wrong,
but the kuffar, well that’s a different matter altogether
But does the fatwa adress exactly who these innocent civilians are? When that becomes more clear, then the Tundra Tabloids will begin to take notice. But then again, ul-Qadri harshly criticized “India and Israel for killing innocent people in their jurisdictions“, while stating that: “Islam is a Faith of peace and should not be linked with incidents of terrorism in any part of the world.”
He also stated that: “There was a time when Islam was at the pinnacle of its glory and Islamic culture had its penetrating impact on other countries. Today the Muslims have been lost in the daze of Western civilization and culture with the result that they had become fully oblivious to their own identity and culture. Western culture has totally enslaved us.”
Face it, Dr Muhammed Tahir-ul-Qadri, i’s just another Muslim apologist trying to put a positive spin on Islam as a ROP and that Islam is a superior culture. Next. KGS

A leading Muslim organisation in Britain has issued a fatwa against suicide bombings and terrorism, declaring them un-Islamic.
Minhaj-ul-Quran, a Sufi organisation based in East London which advises the Government on how to combat radicalisation of Muslim youth, will launch the 600-page religious verdict tomorrow. It condemns the perpetrators of terrorist explosions and suicide bombings.
The document, written by Dr Muhammed Tahir-ul-Qadri, a former minister of Pakistan and friend of Benazir Bhutto, declares suicide bombings and terrorism as “totally un-Islamic”. It is one of the most detailed and comprehensive documents of its kind to be published in Britain.
The fatwa, which was released in Pakistan last month, uses texts from the Koran and other Islamic writings to argue that attacks against “innocent citizens” are “absolutely against the teachings of Islam and that Islam does not permit such acts on any excuse, reason or pretext”.
Dr Tahir-ul-Qadri, who is based in Canada and has written more than 400 books on Islamic law, said: “All these acts are grave violations of human rights and constitute kufr, disbelief, under Islamic law.”
(…)
Radical Islamists will dismiss the fatwa but it will be welcomed by many Muslims from the large community of South Asian heritage in Britain, among whom confusion about religious teaching is exploited by extremists seeking to recruit suicide bombers.
“Extremist groups start brainwashing the young students from British universities and eventually convince them to oppose integration in British society,” said Shahid Mursaleen, a spokesman for Minhaj-ul-Quran.
The fatwa would help fight extremist recruitment of young Muslims and was “one of the most comprehensive verdicts on this topic in the history of Islam”, he added.
Inayat Bunglawala, former spokesman of the Muslim Council of Britain and founder of the new group Muslims4UK, set up to counter the radical message of the newly banned Islam4UK and other extremist groups, welcomed the fatwa.
“This adds to the view of many Islamic scholars internationally that terrorism and suicide bombings are unacceptable in Islam,” he said. “It is a positive initiative. Anything that helps move young people away from violence and from those who promote violence must be welcomed.”