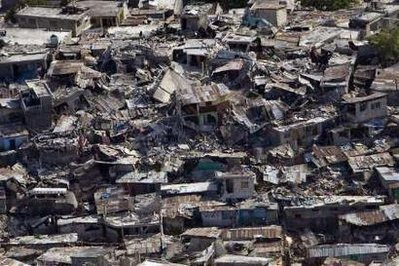 Anarchy rules the land
It’s safe to say that the government never truly represented the people anyways, being just one more (larger) faction in the gang-land state called Haiti. This disaster has shown that “the governement” was nothing more than a shadow, a chimera, that quickly vanishes when it’s most desperately needed.
These people not only need the basic of everything, clean water, food and shelter, they need an actual, dependable government that will help facilitate the dispensing of aid as it comes in from abroad. Right now, gangs rule the streets weilding machetes and axes. KGS

Who’s running Haiti? No one, say the people

PORT-AU-PRINCE, Jan 14 (Reuters) – Desperate Haitians turned rubble-strewn streets and parks into makeshift hospitals and refugee camps on Thursday in the absence of any noticeable response from authorities in Haiti after Tuesday’s earthquake.

With the 7.0 magnitude earthquake collapsing the presidential palace, a string of ministries and the headquarters of the U.N. peacekeeping mission in the country, Haiti faces a dangerous vacuum in security and government.

The Caribbean nation of 9 million people, the poorest in the western hemisphere, has a turbulent history of conflict, social turmoil, dictatorship, fragile institutions and devastating natural catastrophes.

Many in the capital Port-au-Prince picked away at shattered buildings with bare hands, sticks and hammers hoping to find loved-ones alive. Thousands of homeless people began to set up their own camps anywhere they could, the biggest right opposite the collapsed presidential palace.

“Look at us. Who is helping us? Right now, nobody,” said Jean Malesta, a 19-year-old student who was the only survivor when her apartment building collapsed from the powerful quake that has killed thousands, possibly tens of thousands.

She and a dozen others lay under a tent they had set up in the park opposite President Rene Preval’s palace. His weak and under-resourced government appears totally unequipped to handle the crisis, its officials in disarray and nowhere to be seen.

“So far, they have brought us nothing. We need water, food, shelter, everything, but we are on our own,” Malesta added, to cries of agreement from women sitting and lying around her.

A major international aid effort has not yet kicked in, although plenty of small groups, many from the United States, have scrambled quickly, moving personnel into Haiti by plane and overland from neighboring Dominican Republic.

“The problem is that unlike traditional disaster situations we have few local partners to work with, because most of them have had their buildings destroyed and are looking for their own dead and missing,” said Margaret Aguirre, a senior official with International Medical Corps.