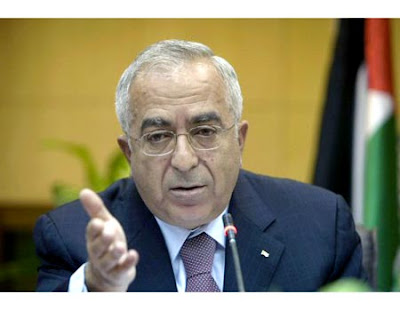 Fake PM, Salam Fayyad
When I say settlements, I really mean Jews
They suck it in and spit it out like it came from their mothers’ breast. Lying to the infidel, no matter how secular the Muslim may be, is done with the grace and ease of a masterful performer. They’ll shout “apartheid wall”, “occupation” and “international law”, knowing full well that they can count on the ignorant, willfully ignorant and antisemitic international press (and others) to parrot their warped version of reality.
We have plenty of such types here in Finland that line the benches at the state radio/tv news org. YLE, the Helsingin Sanomat and the Huvudstadsbladet, (just to name a few) who would like nothing better than to report this news, out of context of course, and dripping with sympathy.
The Arabs are nortorious for rejecting every proposal every time, and then demand the international community to force Israel to do “this or that”, in order to circumvent the making of painful decisions themselves. They refuse to accept any of the blame, but yet demand that Israel make all of the compromises. KGS
Fayyad envisions ‘state free of settlements Jews’
In a conference held near Ramallah, Fayyad urged the international community to intervene in order to “force Israel to stop ignoring international law and the Palestinians’ rights.”  He stressed that “we will not agree to the agreements of the past anymore, it is time for the transition period to come to an end.”
NOTE: This is the guy in whom the West placed so much trust in keeping the books honest for the PA. How a serial liar can be trusted is beyond me, but in Fakestinian politics and the Western stooges that support it, it’s business as usual.