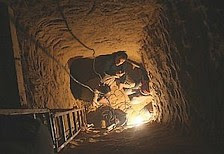 But of course it doesn’t include under the borders with Israel, Abbas has nothing against Hamas digging tunnels to kidnap Israeli soldiers. The sheik who issued the fatwa hasn’t anything against the tunnels contributing to the spilling of Jewish blood either, Sheikh Muhammad bin Salman Abu Jamea (concerning the tunnel owners) :
“merchants and princes of war who have no value or respect for the blood of Muslims”.
When it comes to the spilling of blood of the non-Muslims, especially if it’s Jewish blood, no fatwa will be issued. What we have heard in times past when an imam or cleric issuing a fatwa against terrorist jihadi strikes, they always frame the fatwa or their own dissaproval in the following way, “the targeting of the innocent is never allowed in Islam.” But the non-Muslim is never included in the catagory of “the innocent”. KGS
Fatwa bans work in Gaza Strip tunnels
At the request of the Palestinian Authority, an Islamic scholar published a fatwa on Tuesday banning Muslims from digging or working in tunnels under the border between the Gaza Strip and Egypt.
The fatwa is the first of its kind and is seen in the context of the PA’s efforts to undermine Hamas’s rule in the Gaza Strip. It’s seen by Palestinians as yet another sign of mounting tensions between the PA and Hamas despite attempts by Egypt, Saudi Arabia, Syria and Qatar to resolve the power struggle between the two parties.
The fatwa also comes in response to the death of dozens of Palestinian smugglers involved in the tunnel industry over the past three years.
Sheikh Muhammad bin Salman Abu Jamea, the scholar who issued the fatwa, cited a number of reasons for his decision.
He said that the main reason was that about 300 Palestinians have been killed while working in the tunnels.
“The owners of the tunnels exploit the poor workers and employ them as slaves under the worst conditions,” he said.
Abu Jamea condemned another fatwa issued by a Muslim scholar in the Gaza Strip that permitted tunnel owners to employ laborers under harsh conditions. That fatwa ruled that tunnel owners would pay only $9,000 in compensation to each family whose unmarried son is killed while digging or smuggling, while the family of a married laborer would receive $11,000.
Abu Jamea condemned the tunnel owners as “merchants and princes of war who have no value or respect for the blood of Muslims.”
Addressing the tunnel owners and the scholar who okayed their business, the new fatwa asked: “Have you forgotten how many homes have been destroyed because of the death of their sons? Do you know how many mothers have lost their beloved ones and how many wives have been widowed and children orphaned?”
Abu Jamea also cited the smuggling of weapons as a reason behind his decision to ban work in the tunnels.
“Don’t the arms dealers know that trading in weapons during the period of civil strife [between Hamas and Fatah] is haram [religiously forbidden]?” he asked, adding that the weapons were being used by “rebels” to continue “sowing dissension among Palestinians.”
He also pointed out that the tunnels were being used to smuggle into Gaza alcohol and drugs and other merchandise that was being exploited by manipulative merchants to make illegal profits.
Read more.