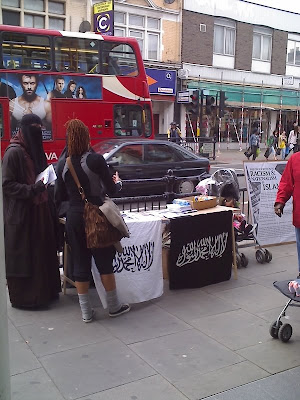 Brits tired of all that dawa
Face it. No people as a national group want to be made to feel uncomfortable or threatened as a people in their own country, whether it by in the UK, Morroco, Algeria or in Hong Kong. If this was being done in the reverse, it would be called colonialism and/or imperialism, but since it’s taking place in Europe, they’ve devised a new name for it, mutli-culturalism.
Hong Kong had experienced European ‘multi-culturalism’ back when the UK ruled the seven seas, with British areas of the city under the protection of the Crown. But they weren’t alone, there were other European enclaves within the city, and elsewhere, that were wrestled away from the sovereignty of the Chinese mainland as well. Why is it that, what happened back then was wrong, but now (in reverse) it’s ok?

The British public are concerned at the rise of Islam in the UK and fear that the country is deeply divided along religious lines, according to a major survey.
More than half the population would be strongly opposed to a mosque being built in their neighbourhood, the study found.
A large proportion of the country believes that the multicultural experiment has failed, with 52 per cent considering that Britain is deeply divided along religious lines and 45 per cent saying that religious diversity has had a negative impact.
Only a quarter of Britons feel positive towards Muslims, while more than a third report feeling “cool” towards them.
The findings, to be published later this month in the respected British Social Attitudes Survey, show that far greater opposition to Islam than to any other faith and reveal that most people are willing to limit freedom of speech in an attempt to silence religious extremists.
David Voas, professor of population studies at Manchester University, who analysed the data, said that people were becoming intolerant towards all religions because of “the degree to which Islam is perceived as a threat to social cohesion”.

NOTE: UNDhimmi has an excellent take on the same article:

It is not Muslim people as individuals that the British people, famous the world over for their sense of fairness and tolerance, are becoming distrustful of – but the massive, unexplained amount of support, forbearance and propaganda from politicians and the élite for this religion – which even the most liberal among us cannot deny presents enormous dilemmas and conflicts within the setting of a modern, pluralist state.
British politicians (particularly Labour governments of Tony Blair and Gordon Brown) and the EU have socially engineered a massive influx of Muslims into the country over the past decade or so – and despite recent reassurances this is showing no signs of letting up.