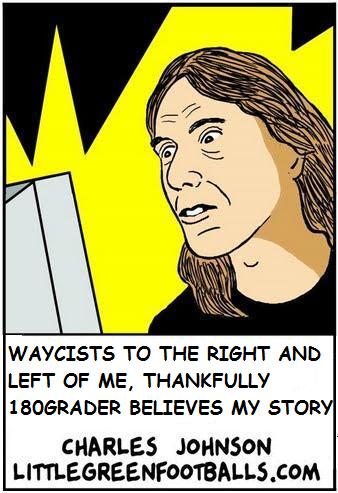 The Baron tosses the Tundra Tabloids the following bit of news concerning Danish magazine 180grader, which quotes the out-of-the-closet Leftist as saying that, Lars Hedegaard, chairman of Trykkefrihedsselskabet, is “someone who should be avoided by decent people”.
The Gates of Vienna translator TB says the following which sums it up rather nicely: “They are trying to do the same thing to Trykkefrihedsselskabet as they tried to do to GoV. Creepy.”
Here’s a few words to remember, it’s an extreme honor to be a part of the crowd that LGF has trashed, libeled and smeared. KGS

Known Islam critic denounces Lars Hedegaard: He is an extremist

The chairman of Trykkefrihedsselskabet, Lars Hedegaard, is an extremist and decent people should not mingle with him. That’s the message from one of the international world’s Islam critics, Charles Johnson, according to Weekendavisen.
After the terrorist attack on World Trade Center in September 2001, Charles Johnson started “Little Green Footballs”, the leading blog among Islam criticizers, where he used a lot of energy to reveal Muslim extremism wherever he found it. The blog quickly became a hothouse for the international Islam criticism movement and was a source of inspiration for other Islam critics.
Today, though, Charles Johnson thinks that many people from that environment, in whose creation he himself was a primary engine, have become too extreme, and actually more fascist than liberal in their criticism of totalitarian Islam, and in their proposals of how to fight it. One of the persons whom Charles Johnson places among the bad people is Lars Hedegaard. Johnson read a controversial speech which Hedegaard gave in Brussels in 2007. And he saw the English-language interview with Lars Hedegaard which was published on the Danish blog Snaphanen.dk, and then Johnson noticed that Trykkefrihedsselskabet associate themselves with the Belgian party Vlaams Belang [This is off course a lie. They only supported their right to speak out freely after they were assaulted in Brussels. — translator] which Ayaan Hirsi Ali has called a “racist, anti-Semitic, extremist party”.
Given that background Charles Johnson’s verdict over Lars Hedegaard is clear:
“Now that I have realized his connection to Vlaams Belang and his extreme statements I would like to put him on my list. I remember him very well. He is obviously an extremist, and to talk about ‘a public uprising’ is insane. He associates himself with fascists and calls for violence and he should be avoided by decent people,” says Charles Johnson to Weekendavisen.

Read the rest at GoV

NOTE: Lars Hedegaard was thrown under the LGF bus ages ago, he joins the Tundra Tabloids and the rest as being those “wascally waycists”.