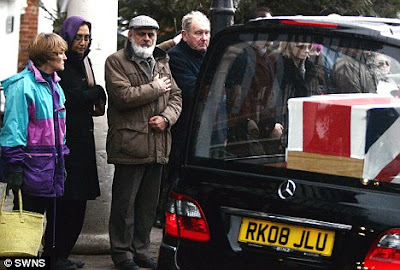 Kudos to these two Brits,
but where are the rest?
Yes, it’s great that Abdul and Samina Latif think Anjem Choudary is a radical and is to be despised, but where are the rest of their fellow “mild Muslim” friends joining them in their showing respect for the fallen Brit soldiers and spitting in Anjem Choudary’s direction?
Don’t be fooled, until a greater number of Muslims start to show up at these public functions to show their support for the society in which they live and have given them so very much, a couple of token Muslims does not mark the beginning of a trend. KGS
NOTE: The Sheik knocks this one out of the park:
Mehdi Hasan: Please don’t listen to Anjem Choudary

Mehdi Hasan, if you remember, is a raving Muselmaniac who, according to the far left Harry’s Place website, engages in vitriolic speech and makes ”foam-flecked denunciation of atheists and “disbelievers”- . Among other rants, Mehdi Hasan also calls atheists and disbelievers “cattle” and “of no intelligence”. Please note that this Mehdi Hasan is a Koranimal who engages in sly jihad, stealth jihad, to be brought upon us by infiltration, subversion and outbreeding.
Mehdi Hasan takes issue with Chaudary’s loud mouthed, aggressive style of jihad, which could wake up too many infidels from their self-induced multicultural slumber before the soldiers of Allah are ready to charge, with full weaponry, as commanded by Koran & sunnah. Mehdi wants you to go back to sleep.

Really, there is nothing to worry about: He, Mehdi Hasan, is a moderate. Chaudary is a “radical” who needs to be kept out of the “sensationalist and irresponsible media”- we really don’t want to wake up any sleeping dogs now, do we? MORE HERE

Muslim mourners pay tribute to soldiers at Wootton Bassett as top officer says hate preacher ‘DOES have right to march’
A Muslim couple heaped shame on hate preacher Anjem Choudary yesterday as they paid tribute to two British soldiers killed in Afghanistan.
Abdul Latif and his wife Samina joined hundreds of people in the streets of Wootton Bassett as two more casualties of the war returned to Britain for burial.
The couple joined condemnation of the fundamentalist cleric’s plan to lead 500 Islamic extremists on a march through the town.
Yesterday Mr Latif, 65, and his 52-year-old wife joined the family and friends of Rifleman Aidan Howell, 19, and Sapper David Watson, 23, as their bodies were repatriated.
The soldiers were killed when Taliban booby-trap bombs exploded in Helmand province last week.
Mr Latif, who has lived in Wootton Bassett since 1995, said: ‘I’ve been to these repatriations about 13 times and we have great sympathy with the families who have lost their children at war.
‘They are fighting for all of us, not just their religions, but the whole country. ‘We have great respect for everyone that passes through here. ‘We sit here in peace and harmony while they fight for us. Whatever my beliefs, they are human just like us.
‘Although we believe in Islam, we do not support Islam4UK. They are a minority of Muslims. ‘They are extremists and we will not support them walking through Wootton-Bassett.’