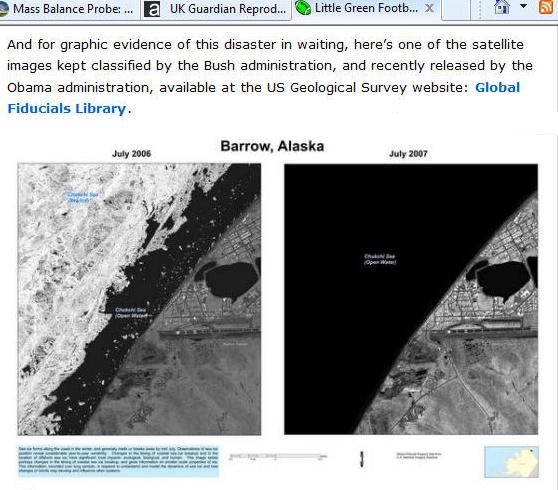 BUT ACCORDING TO JOHNSON
IT’S THE SMOKING GUN!
The Tundra Tabloids received information about the latest nonsense coming from CJohnson at LGF, (a staunch GW supporter) who can’t stand to see Al Gore taken to task by the conservative blogosphere for his over zealous behavior in hyping everything possible about “the science” defending anthropogenic warming of the globe.
What is telling, but predictable, is CJ’s willingness (like Al Gore) to hype the science using whatever he can to prove his point, even though it’s taken completely out of context, like for an example, his use of the sattilite pictures from the Barrow ice shelf area in Alaska.
MacRanger blog dealt with the use of the very same photos by the leftist Guardian in a July 26 report of this year, stating that (using differnt angle pics of the same area):
Almost so bad it’s laughable. Back in 2006 Barrow was hit by an Ice Surge, an abnormal accumulation of Ice, and not even the “normal” Ice accumulation for that area. Subsequently, as expected, it subsided the following year in 2007 in July. Normally ice breaks up around this time of year, so 2006 was an abnormality, but with the accumulation of ice, not the absence. Here’s a picture from the ice surge.

But aside from the seasonal appearance of the ice, it’s not just that easy fact that makes you doubt the picture. Barrow is a fishing port as as such a large amount of ships come and go through that area. Note the absence of lights (it’s a night picture) in the water. It’s too “clean to have been a part of the photo. It’s as if half the picture is missing.
Here’s a picture from a Barrow Sea Ice Cam, from today, 7/26/2009. You can see the ice clearly off the cost, just where it’s been all along. Along with that here is the “Sea Ice Break-Up” outlook for Barrow Alaska. According to the site it began on July 11th.
UAF (Floating Ice Group): “We would like to emphasize that the images released are scientifically extremely valuable. They both clearly demonstrate the year-to-year variability of ice conditions and document the progress of summer ice break-up in Barrow 2006 in unprecedented detail. However, unlike suggested by some, comparing summer ice conditions in July 2006 and July 2007 is not sufficient evidence to verify a trend. “

But that’s not all, when you do some actual checking, here is a report from the scientists who state that on June 12th 2009, they are just beginning to remove their instruments from the ice shelf that is beginning to melt, in prepartion for the seasonal change.
Jun 13, 2009, 02:15 PM AKDT Air temperature: -11 °C, 12 °F Ice thickness: 0.94 m, 3 ft 1″
Floating Ice Group: “We are currently (June 13) in the process of removing instruments from the ice. Data quality is not assured starting June 3 due to movement of the instruments in melting ice. The following measurements have known systematic errors: water depth reported is too shallow; ice thickness reported is too thin; snow cover reported is too thick.”
This is so laughable that the Tundra Tabloids’ sides are beginning to ache. That is the reduced fact finding prowess of the head lizard ever since his own “drifting” from the Right-wing blogosphere, to the land of Left-wing buffoonery and nonsense. Here is a video of the fellow travelers Chuck Johnson is aligned with. KGS