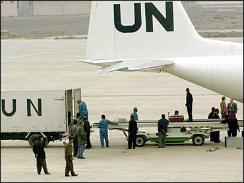 From Swedish: Hugh Griffiths of SIPRI told Swedish news agency TT that the North-Korean weapons plane was leased by the UN for humanitarian shipments for one year starting March 2003. His report from May of this year shows that 90% of cargo plane companies identified as working in arms shipments were also used by the UN, EU and NATO, as well as leading aid agencies, such as Doctors without Borders and the Red Cross.
MORE!
A number of governmental, intergovernmental and NGO officials recognize that air cargo carriers named in UN Security Council and other arms trafficking related reports have accessed and continue to access significant humanitarian aid, peace support, stability operation and defence logistics supply chain contracts. However, other than sporadic media reports, there have been few open source references to the problem in policy-oriented documentation.129 These markets have been comprehensively penetrated by arms traffickers:
at least 90 per cent of intercontinental air cargo carriers named in UN Security Council and other arms trafficking-related reports have also supplied UN agency, EU and NATO member state government departments, NGO and private contractors in Africa, Europe and the Middle East.130 Air traffic control records indicate that air cargo carriers involved in humanitarian aid contracts and documented by the UN
as involved in destabilizing commodity flows are also integrated into licit markets supplying a variety of legal, consumer goods to African states while transporting foodstuffs and other raw materials to Europe and the Middle East.131
(…)
Various UN agencies, EU and NATO member state government departments, humanitarian NGOs and defence contractors have used these types of air cargo carriers for single and multiple delivery operations over periods ranging from less than 48 hours to 10 years.132 UN missions have continued to contract aviation services from companies that have been named in UN Security Council reports for wholly illicit arms movement and have been recommended by the UN for a complete aviation ban. For example, UN peacekeeping missions in Sudan have continued to use aircraft operated by Badr Airlines even after the UN Security Council recommended an aviation ban be imposed on the carrier in response to arms embargo violations.