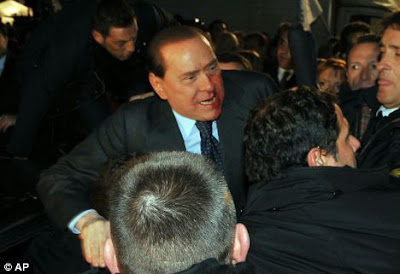 “He got out and tried to climb on the car to show he was all right, before being driven away. It was a typical show of defiance by a political fighter” BBC

NOTE: The Tundra Tabloids assumes that security for the Prime Minister will be tightened here after.

With a split lip and his face covered in blood, this was Silvio Berlusconi after he was punched to the ground by an attacker yesterday. The 73-year-old Italian prime minister was assaulted as he signed autographs at the end of a stormy political rally in Milan.
A man stepped from the crowd and dodged bodyguards before smashing the politician in the face – apparently while clutching a model of the city’s Duomo cathedral in his clenched fist. The attacker, named last night as Massimo Tartaglia, was quickly seized by police and taken away.
TV showed a stunned Mr Berlusconi with blood around his mouth as he was lifted to his feet by aides. He was bundled into his official car but immediately got out, apparently in an effort to show he was not badly injured. After looking out into the crowd, the aides pulled him back into the vehicle.