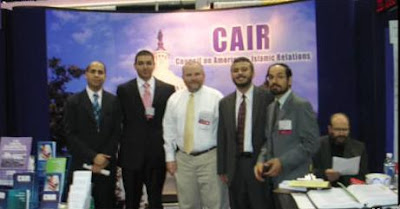 CAIR: Only our bigotry
is beyond reproach
The only crime here might be the violation of a local statute prohibiting the posting of sexually explicit material in a public place, other than that, this is a non-issue. But it’s to be expected that the Hamas front group in America, CAIR, which is the focus of the new book, Muslim Mafia, which exposes the faux “civil rights” group as being not only a fraud, but acting against the US constitution.
Being heavily funded from the Middle East, this US Muslim Brotherhood front group for Hamas (of about 5000 members) continues to pass itself off as a credible Islamic organization founded to protect Muslim civil rights. But increasingly, it’s becoming more obvious to all, that it has ulterior motives for being founded, (read Muslim Mafia) and never misses a chance to defend terrorists, while seeking to hamstring US officials and the policies they are sworn to enforce that help to keep Americans safe.
So now they have something to sink their teeth into, but it’s only due to the supposed sexaully graphic nature of the pictures, not because they are anti-Islamic. CAIR was connected to the Holy Land Foundation as an unindicted co-conspirator, in which five persons were convicted of providing 12 million in funds to the terrorist group Hamas, which routinely by the way, incites against Jews worldwide, and whose charter contains exact quotes from the anti-Semitic Protocols of the Elders of Zion.
So the anti-Semitic organization CAIR, due to its affiliation with not only the now defunct HLF, but as a Muslim Brotherhood front group as well, is claiming the high moral ground over a few graphic pics, while it seeks to take Pamela’s “Merry Christmas, Rifqa!” campaign to court.

Henrik Raeder Clausen comments to the Tundra Tabloids: “CAIR is aiming for a new record in the “Make ourselves look stupid” category – they’re taking Pamela’s “Merry Christmas, Rifqa!” campaign to court! Pamela invites all those who sent Rifqa Bary cards, who are now technically parts of the case, to write to the court as well. Seems she’s making a nice splash here!”

A St. Cloud human rights group has offered a $1,000 reward in the hopes of finding the person responsible for posting anti-Islamic cartoons in the city this week. Create CommUNITY, a nonprofit organization that promotes racial harmony, announced Friday that the money would be posted with the Tri-County Crime-Stoppers for information that leads to an arrest and conviction in the case.

The crude cartoons were found stapled to a pair of utility poles Tuesday. They depict the prophet Mohammed in derogatory ways, the Qur’an and a swastika. One of the posters was stapled to a pole outside the Mandeeq Shop, a discount store named in honor of the native name for Somalia. The city attorney’s office is investigating whether the cartoons violate any criminal statutes and, if they do, the case could be treated as a bias crime. Police have received tips in the case but have made no arrests.

NOTE: The TT wonders who is funding this group Create CommUNITY? If any of the TT’s readers have a clue, please leave it in the comments. It’s mission statement reads: “It is the mission of Create CommUNITY to Dismantle Racism through Systemic Change.” Sounds like a speudo human rights group, that is actually promoting cultural Marxism.

NOTE: After a cursory look, the coordinator for Create CommUNITY, Hedy Tripp, is recognized as being in the “community change and racial justice” network:

“Founded in 1988, our work is national in scope and includes research and evaluation, strategic planning, and policy analysis. Our work is characterized by a “theory of change” approach, focus on results and outcomes, and a racialized perspective.”

UPDATE: Hedy Tripp is also leader of the National Asian Pacific Women’s Forum (NAPAWF), St.Coud chapter. Surprise surprise, the organization is solidly behind the Obama administration’s march to socialized health care in the US.