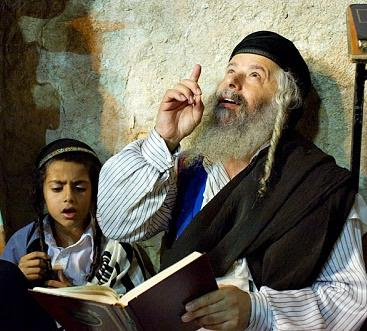 Make sure Samuel when you go up to the Temple Mount,
don’t move your lips or you’ll find yourself in a world of trouble
Jews also have to be vigilant in their own city of Jerusalem to ensure Islamization will not rob them of their own precious rights. This time two Jews get arrested and brought down to the local police station for just moving their lips, and then have to insist that they were in fact not moving their lips, like moving one’s own lips in prayer is a crime against humanity. This is as surreal as it gets. KGS
Bride, Father Arrested for Crime of Moving Lips on Temple Mount
(IsraelNN.com) A Jewish bride and her father were arrested on the Temple Mount the day before her wedding, after an Arab policeman claimed he saw the father muttering prayers and the bride nodding her head.
The father and daughter were being taken around the site on Wednesday morning by her brother Eli, a volunteer who conducts regular tours at the Temple Mount, when suddenly they were accosted by the Jerusalem policeman.
“We were in the northern part, and I was showing them the archaeological evidence when suddenly a police officer came over to us, Mahmoud Hativ was his name, and he claimed that my father had muttered prayers. “We tried to argue with him and said it wasn’t true, but he said, ‘You can’t fool me,’ and insisted that my father had prayed,” Eli told Israel National News.
“My sister was just standing there silently, not moving at all. She didn’t say a word. It was her first time at the Mount. Other cops came over, Mahmoud said that she had also been involved, and they decided to arrest them both,” he continued. “He let me go right away, because he couldn’t make any claim against me.” His sister and father were taken to the Kishla police station near the Jaffa Gate in the Old City of Jerusalem.
‘Lack of Will to Exercise Israeli Sovereignty’
“The fact that a father comes to the holiest place of the Jewish people and can be arrested simply for allegedly moving his lips is an outrage,” Eli said.
“The Supreme Court has repeatedly ruled that the holy sites of all religions have to be protected and respected – that explicitly includes the rights of Jews on the Temple Mount. Jerusalem police continue to ignore that ruling.”