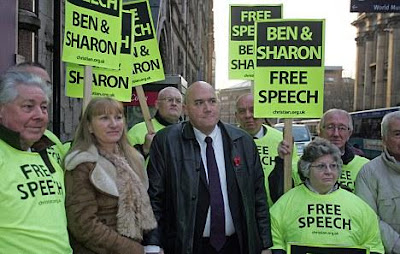 Sharon and Ben Vogelenzang:
Liars never  prosper
This is a case of jihad by another means, using the court system to intimidate the unbelievers into submission. In the old days, or presently in the Middle East, these infidels would have been murdered and no court case would ever have seen the light day. So the jihadis have to use the Western style system against itself, until its finally done away with altogether and the murder of non-Muslims can continue as before.
The woman pressing charges against these hotel owners is evil, she is bearing false witness against her neighbor and doing so to further her jihadi goals. The US has its own share of courtroom jihad going on as well, as CAIR sponsors (through funding coming from the ME) one claim after another in order to wear down the resolve of their opposition, us. The jihad’s use of lawfare is just one more arrow in their arsenol, but make no mistake, they are not the only ones with deep pockets.
It also helps to have truth and morality on your side, something of which the jihadists lack, so that means the overwhelming number of people watching from the sidelines, will automatically side with those fighting against the jihad. People have a nose for sniffing out the truth, that’s the reason why the jihadis spend a lot of time lying and throwing up one red herring after another, in hope to obfuscate the issues. Reasonable people however will spot it, and vote against them, like the Swiss did in the banning of minarets.
This female convert to Islam has been trained to lie to the non-Muslim, and that, more than her accusations against the hotel managers, is what should be at the center of attention.  KGS
Christian hotel manager in court accused of asking hijab-wearing guest: ‘Are you a terrorist and a murderer?’
Two Christian hoteliers went on trial yesterday accused of insulting a Muslim convert by branding Mohammed a ‘warlord’ and telling her she was living in ‘bondage’.
Ben and Sharon Vogelenzang allegedly asked 60-year-old guest Ericka Tazi if she was a terrorist and a murderer after she came down to breakfast wearing an Islamic headscarf.
The white, British-born grandmother, who was staying at the couple’s hotel while undergoing medical treatment, told a court the pair had shouted abuse at her, leaving her shocked and traumatised.
However the couple’s barrister challenged her account, suggesting she had worn Islamic dress to provoke the Vogelenzangs and that they merely engaged in a legitimate discussion about their faiths.
The couple, who run The Bounty House Hotel in Aintree, Liverpool, both deny the unusual charge of committing a religiously aggravated public order offence, which carries a maximum fine of £5,000.
Christians gathered outside Liverpool magistrates’ court to support the couple
Read more.