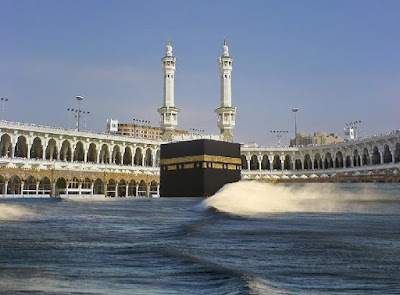 The smooch stone gets a needed wash
The Saudis are one of the more corrupt Islamic states, and that’s saying a lot when you consider the rest of the Arab League and OIC member states they rub elbows with. Prof.Barry Rubin has an excellent and timely post at his blog, RubinReports, due to the fact that the Tundra Tabloids has just received word that the Saudis are in panic mode over the fact that Shi’ite rebels are making their way north into the Saudi Kingdom.
The Saudis, for all their oil wealth, are a rather inept group of goat herders. The Tundra Tabloids remembers hearing of the Saudi air force, that the shelf life of one of their F-16 is rather short, due to the pilots being picked, not according to intellegence and skill, but by the fact that they are Saudi princes, and are given head of the line privileges to fly them. It’s one of their achilles heel, graft and corruption. Barry Rubin explains how it’s cost them. KGS

Saudis ‘in a panic mode’ as Shi’ite rebels move North from Yemen:

[Western intelligence sources said Jordan’s King Abdullah sent the SOF units to Saudi Arabia in November 2009. The sources said the Jordanian king was acting on an urgent request from his Saudi counterpart for elite soldiers who could hunt for Iranian-backed Shi’ite rebels in both Saudi Arabia and northern Yemen. “The Saudis are in a panic mode and don’t have the troops or capabilities to stop the Yemeni Shi’ites,” an intelligence source said.]

The Saudi Regime is Flooded with Problems, Some of which It Can’t buy off

Four years ago, in my book, The Long War for Freedom: The Arab Struggle for Democracy in the Middle East, I wrote about an American-educated Saudi building contractor named Hussein Shobokshi. He had written an article warning that the infrastructure of Saudi cities was so poorly designed that there was tremendous danger of a massive flood which would cause great destruction.
Why? Because corrupt government officials had done a bad job but they went unpunished and their bad work unrepaired because of their royal family connections.
In another August 2003 article in a Saudi newspaper, Shobokshi related a bedtime story he told his seven-year-old daughter about his dream that Saudi Arabia would one day be a country where she would be able to drive and be a lawyer; where there are elections and human rights’ conferences, female cabinet ministers, and mosques hold educational classes that discuss religion freely. In response, he received some praise but more death threats.
The government did respond to his complaints and criticisms. Despite the fact that he was a major stockholder of the newspaper, his column was permanently cancelled.
And now, guess what? Under similar conditions there was a flood in the city of Jiddah. The incomplete death toll now stands at 113.
The Saudi government has responded by forming a committee, which formed sub-committees, which planned their agenda, which will some day supposedly lead to the issuing of recommendations.
One of the sycophantic Saudi newspapers put it this way:
“The King’s historic order to determine the real cause of the disaster and who or what was responsible for it has been widely welcomed by the public, Prince Khaled said. “It was a great gesture from the King that has resulted in widespread public appreciation and positive feelings,” he said.
With years of praise for allegedly making reforms by various Western researchers, British refusal to investigate Saudi bribes to UK defense contractors and the near-appointment of an American who was virtually on the Saudi payroll to manage U.S. Middle East intelligence, the Saudi regime continue to remain rather under-criticized. The previous president of the United States was also quite friendly toward Saudi regime interests. study undertaken in part by a Georgetown University research center which received funding from Saudi royals has recently declared the Saudi king to be the world’s most important Muslim.
The reason, of course, is that Saudi money buys a lot of friends and a great deal of silence.
Read it all here. KGS