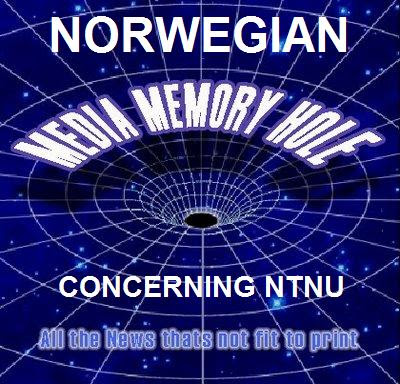 NORWEGIAN ELITISTS ARE TRYING TO REINVENT
THE HISTORY SURROUNDING THE NTNU AFFAIR
Dr.Manfred Gerstenfeld, Chariman of the Board of Fellows at the Jerusalem Center for Public Affairs, writes in the Jerusalem Post Yesterday, about the Norwegian media’s systematic revisionism of the events surrounding the NTNU anti-Israel lecture series and subsequent call for vote on whether or not to boycott Israeli universities.
Dr.Gerstenfeld also gives the Tundra Tabloids a nod for its publication of a photograph of Norwegian Minister of Finance at an anti-Israel event where she’s smiling along side a sign that read “The greatest axis of evil – USA and Israel”. According to Norway’s ambassador to Israel, “it had been a dignified event”, though there were shouts of death to Jews as well as signs like the one just mentioned. It’s safe to believe that there were even more provocative signs at the demonstration as well.
Norway is in deep spin mode now as they realize just how bad their international image is being tarnished by the outing of their biases towards Israel, that at times, crosses over into anti-Semitism. They hate the very spotlight highlighting their buffoonery that they themselves have created. How touchingly ironic. KGS

Are we whitewashing events in Norway?