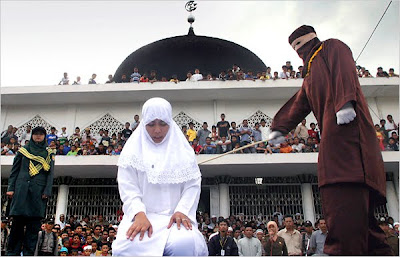 Hurting for the mood god
Another good reason why non-Muslims should oppose sharia with every breath, it’s not just for the Muslim, it’s for the non-Muslim as well! This is the full force of Islamic law, it dictates every aspect of one life, from the moment your born, until the time your life ends, all is covered by this evil system.
The Tundra Tabloids knows of one such individual who is both Sudanese and a non-Muslim, and who has personally suffered from Islam, Kuel Jok, an academic working and living in Finland. He knows exactly what the Christian community and other non-Muslims go through at the hand of Islam. It, sharia law, effects them as well, and with devestating results.

Without jihad and sharia, Islam would collapse, that’s why no single or collective Muslim institution of Islamic jurisprudence will ever denounce these two institutions, they are crucial for the expansion and survival of this evil system.

A 16-year-old Sudanese girl was lashed 50 times after a judge ruled her knee-length skirt was indecent, her family said today.
The mother of Christian teenager Silva Kashif said she is to sue police and the judge who imposed the sentence under Islamic shariah law.
Saying she only learned about her daughter’s conviction after she had been lashed, mother Jenty Doro said the family’s religion should have been taken into account.
Kashif, whose family comes from the south Sudanese town of Yambio, was arrested while walking to the market near her home in the Khartoum suburb of Kalatla last week, Doro told Reuters.
‘She is just a young girl but the policeman pulled her along in the market like she was a criminal. It was wrong,’ said Doro.
Doro said Khashif was taken to Kalatla court where she was convicted and punished by a female police officer in front of the judge.
‘I only heard about it after she was lashed. Later we all sat and cried … People have different religions and that should be taken into account’ she said.
Kashif’s lawyer Azhari al-Haj said he was preparing a case against the police and judge for arresting and sentencing an under-age girl. He said according to the law, people under 18 should not be given lashes.
‘She was wearing a normal skirt and blouse, worn by thousands of girls. They didn’t contact a guardian and punished her on the spot.’
Al-Haj said he was hoping to win compensation and to clear Kashif’s record. ‘We are also against the law itself. We want the law to be changed.’
Read more: