Skip to content
Home
/
2009
/
November
/
17
/
Uncategorized
/
AFGHAN FOLLIES: THE TALIBAN HITS THE JACKPOT AS BRITS FOLLOWING US IN BRIBERY ATTEMPT OF JIHADIS …….
Facebook
Twitter
Google+
LinkedIn
Pinterest
THE JIHAD SOON TO BE
FLUSH WITH CASH 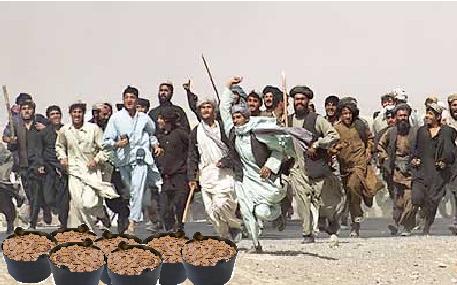 THE TALIBAN:
Now we can really fund the jihad!
What can one do but shake the head. While the world is busy talking about how corrupt the current Afghan government is, which is BTW, slowly becoming the basis for the removal of all Western support, NATO forces are mounting a campaign of bribing their way into favor of those Afghans most likely to take up arms and join the jihad.
The Afghani government and NATO forces would be better off handing out a few chickens per nose, than handing over hard cash to people already influenced by Islam and jihad. Of all of the foolish schemes to date, this ranks as one of the worst, because the gold is going to go directly into the financing of the jihad against themselves, and the Taliban is going to have the last laugh. What a farce. KGS
Army tells its soldiers to ‘bribe’ the Taleban
British forces should buy off potential Taleban recruits with “bags of gold”, according to a new army field manual published yesterday.
Army commanders should also talk to insurgent leaders with “blood on their hands” in order to hasten the end of the conflict in Afghanistan.
The edicts, which are contained in rewritten counter-insurgency guidelines, will be taught to all new army officers. They mark a strategic rethink after three years in which British and Nato forces have failed to defeat the Taleban. The manual is also a recognition that the Army’s previous doctrine for success against insurgents, which was based on the experience in Northern Ireland, is now out of date.
The new instructions came on the day that Gordon Brown went farther than before in setting out Britain’s exit strategy from Afghanistan. The Prime Minister stated explicitly last night that he wanted troops to begin handing over districts to Afghan authorities during next year — a general election year in Britain.
More here.