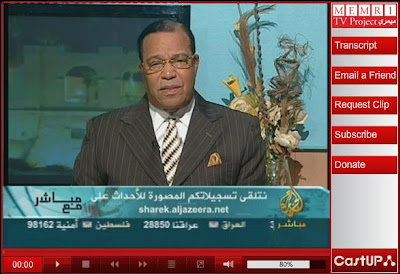 Anti-Semite Luis Farrakhan: It’s the cabal of Christians and Joooos
that’s to blame for Nidal Hasan’s “snapping”
Luis Farrakhan is a racist bloodsucker. He sucks the life out from poor black communities by turning it into a bunch of bigots and racists while he milks these people of their scarce cash to profit his own hateful organization. The man is foul, and any news organization that gives this man a platform to speak from, commits a grave error. Here is the MEMRI organization’s video clip of the racist, as well as a few choice pieces of the transcript :
“It is because, my dear brothers and sisters, Islam was making so much progress in the United States that those anti-Islamic forces are trying to stem the tide of the progress of Islam.” “As you know, since 9/11, in America and in other parts of the world, those anti-Islamic forces have stepped up their efforts to make Muslims… to cause the Muslims to be looked at as uncivilized, savage, or wicked people. This is an attempt by anti-Islamic forces, and some members of the Jewish community, and some members of the Christian community, who have united to condemn Islam and to speak ill of our Prophet Muhammad, and to even go so far as to say that the Muslims worship the devil.” […]

Actually it’s not the Christians and Jews who make the Muslims look uncivilized, savage or wicked, they generate enough negative publicity about Islam all by themselves, the rest of us onlookers are just shining the spot light on the obvious. As far “speaking ill of their prophet” goes, the best examples of this are found whenever you crack open a book of the Koran.

“So when you are being insulted by your superior officers or by your fellow soldiers, at some point, a person might break. Unfortunately, I believe this is what happened to Captain Nidhal Hassan.”

It’s a fact that in the US military, if one wants to ruin his/her career, all they need to do is to speak ill of a minority. The anti-Semite, racist, Islamic supremacist Luis Farrakhan is lying between his pointed teeth. KGS