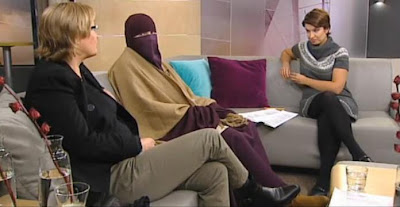 Anti-burka attitudes are the new racism!
From the Gates of Vienna: One of the debating techniques commonly employed by the Left is to take a worthwhile principle and exaggerate it or invert it to create absurd distortions of moral arguments and force its opponents into a swamp of rhetorical excess, false analogies, and categorical errors.

As CNN noted last week, radical Muslims utilize their First Amendment rights to proclaim their hatred of non-Muslims, to applaud the killing of infidels, to celebrate the coming destruction of Israel, and to support all manner of violent action against anyone who opposes the expansion of Dar al-Islam. They repeatedly approach the line between free speech and incitement, but carefully avoid crossing it.
The “flying imams”, in their legal action against the airline and airport authorities, were at pains to point out that everything they did was protected by the Constitution. British Muslims who carry placards exhorting their fellows to “kill those who insult the Prophet” loudly insist, without any apparent sense of irony, that they have a right to free speech when they do so.
But any speech that criticizes Islam is entirely another matter, and so we come to:
2. Freedom of religion
A Muslim’s freedom of religion trumps the right to free expression of anyone who expresses a negative opinion of Islam. Such “insults” show disrespect, express “racism”, and are forms of “hate speech”.
The OIC has carefully constructed a well-funded initiative to criminalize criticism of Islam under the banner of human rights, using the principle of freedom of religion to insist on the rights of Muslims everywhere not to be offended.
Freedom of religion also requires that non-Muslims institute halal menus, install footbaths, allow the separation of the sexes, and supply all the other accoutrements that Muslims demand for the unhindered practice of their faith.
For Muslims, freedom of religion doesn’t mean being left alone to practice their faith as they see fit. It means an active accommodation by non-Muslims to whatever conditions Islam insists are necessary.
3. The rights of women
Islam draws from the lexicon of Western feminists to codify the restrictions it places on women, according to both scripture and Muslim tradition.
The wearing of the headscarf then becomes a “right”, which just happens to be something that Muslim women want to do. The fact that women who dare to go unveiled are routinely beaten or killed — and that an awareness of this prospect helps women focus their minds on claiming their “right” — is ignored.
The strictures of sharia as they apply to women — whether they concern the veil, marriage, divorce, child custody, or ownership of property — are recast as the “rights” of women.
Pliant Muslim spokeswomen routinely assert their right to be treated as inferiors by custom and under the law.
The last of these items is demonstrated by the gradual evolution of a woman’s “right” to wear the hijab. The boiling of this particular frog begins with innocuous assertions of freedom of choice.
Read it all here.