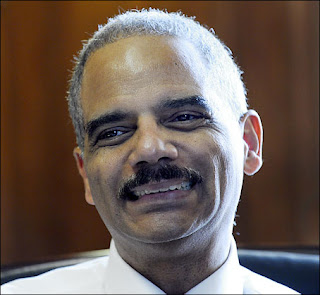 The disgraced Eric Holder:
My actions reflect the views of the president
ATLAS: [On the twentieth anniversary of one of freedom’s monumental moments, one of America’s finest moments, the fall of the Berlin Wall, Obama is MIA. Huh?

Yes, the mirror man who has never met a camera or teleprompter he didn’t fall head of heels in love with is NOT at the anniversary of the Fall of the Wall. He sent a video. I kid you not.
He went to a meeting of the Organization of the Islamic Conference Alliance of Civilizations (instead of the graves of the glorious dead on the anniversary of Normandy), toured Turkey’s mosques, bowed to the wahhabi Saudi king, coasted to Copenhagen to whore for his cronies in Chicago (Olympics) — but he can’t go to Germany for this stunning historical triumph of free men.]

The Tundra Tabloids’ level of disgust with the Obama adminstration and his hand picked underlings, has reached new heights, as the US president rejects traveling to Fort Hood to meet with the grieving families of the dead and wounded, (or even being there in Berlin to celebrate the fall of the Berlin wall) choosing rather to hang out at Camp David while his top US official, Eric Holder plans to speak at a function where CAIR, the front group for the terrorist organization HAMAS will be attending.
This stinks, and every US citizen shold be outraged that Obama didn’t immediately get off his ass and fly to Texas to stand with his troops as Commander In Chief of US armed forces. No, he chose rather to offer a few meaningless words and then off to Camp David for some R&R. Adding insult to injury is his Attorney General’s planned speaking engagement at a function where CAIR, the Muslim Mafia, which is also an unidicted co-conspirator in the Holy Land trial in which five men went to jail for funding  the terrorist group Hamas.
The FBI said that they will not have anything to do with them: “Until we can resolve whether there continues to be a connection between CAIR or its executives and HAMAS, the FBI does not view CAIR as an appropriate liaison partner,” But you would think that that would cause the US’s top police official to decline his participation where CAIR officials were invited as guests.
Nope. This is Obama Land. 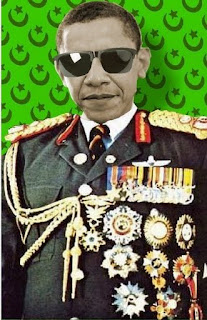 Welcome to the banana republic of the United States
H/T: For the picture, Baron Bodissey

Despite ban, Holder to speak to CAIR-linked group

Attorney General Eric Holder has agreed to give a keynote speech next week to a Michigan group which includes the local branch of the Council on American-Islamic Relations even though the FBI has formally severed contacts with the controversial Muslim civil rights organization.
On Nov. 19, Holder is scheduled to speak in Detroit to the first annual awards banquet of Advocates and Leaders for Police and Community Trust, a coalition of several dozen law enforcement and community groups. An online registration form for the event includes the Council on American Islamic Relations-Michigan on a list of “official & participating organizations.”
A spokeswoman for ALPACT confirmed that CAIR is a member of the coalition.
“CAIR has been involved for a while,” said Chandra McMillion, community development facilitator for ALPACT. “CAIR is listed as an official member.”
The executive director of CAIR’s Michigan chapter, Dawud Walid, also confirmed its involvement with ALPACT. “It’s really nothing controversial. We’ve been part of this organization for years,” he said. “We meet every month and included with us is the U.S. Attorney’s Office, the FBI.”
Walid said he is a regular at ALPACT meetings—including one held Friday at the U.S. Attorney’s Office in Detroit. “A lot of people are there: the NAACP, the ACLU, the American-Arab Anti-Discrimination Committee…the National Lawyers’ Guild,” he said.
The FBI claims it cut “formal contacts” with CAIR after federal prosecutors in the 2007 criminal trial of officers of a Texas-based Islamic charity, the Holy Land Foundation for Relief and Development, introduced documents the government said showed links between CAIR and the Muslim Brotherhood, which gave rise to Hamas.
H/T: Atlas