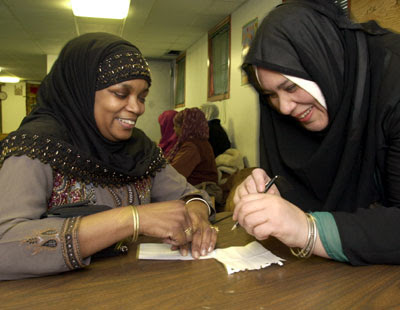 Gee Fathima, how should
we spend our new jizya stimulus?
It isn’t aid were giving them, but jizya money in order to get them, the Muslim world, to somehow like us better. It’s yet more money thrown down the tubes. Funny how “cultural enrichment” actually translates into being, how much black mail money they can lift from our wallets. KGS
Clinton offers U.S. aid to help boost Muslim ties
U.S. Secretary of State Hillary Clinton offered aid on Tuesday to boost ties with the Muslim world and urged Israel, the Palestinians and Arab countries to move beyond recrimination in the search for peace.
“We are determined and persistent in the pursuit of that goal,” she said in a speech at a development forum in Morocco attended by Arab ministers.
After a weekend of heated words about the perceived U.S. tilt toward Israel on the issue of settlements on the occupied West Bank, Clinton said it was important for all sides to “be careful about what we say” and avoid angry rhetoric.
“We need to work together in a constructive spirit toward this shared goal of a comprehensive peace. I believe very strongly that it is attainable … (and) that with your support we can find a way through.”
Clinton’s speech unveiled a modest new set of aid proposals aimed at building on President Barack Obama’s promise in a June address in Cairo to make a “new beginning” on Washington’s strained ties with the Islamic world.