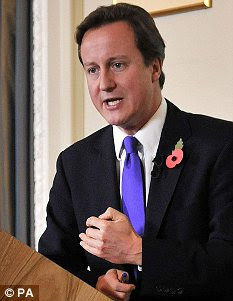 David Cameron to Vlaclav Klaus:
Hold fast!
There’s a scene in the movie “Master and Commander” of a man holding up his two fists with the words Hold Fast tattooed on his fingers, to buckle up the courage of a young sailor officer during battle. The Tundra Tabloids deems the letter written by Tory leader, David Cameron, to Czech President, Vlaclav Klaus, was done with the same intention.
The Lisbon Treaty must be defeated if democracy in Europe is to mean anything anymore, and both Klaus and Cameron stand in the way of it being implemented.
It may very well be that Klaus signs the treaty in exchange for German renounciation of any future desires for land lost during WWII, but it’s a mighty stiff price to pay for that land, seeing that the Czech sovereignty will no longer be a reality once the Lisbon Treaty (read = the already once defeated EU constitution) goes into effect. So the Tundra Tabloids says to David Cameron, the last hope of Europe: HOLD FAST.

David Cameron has been privately criticised by top European leaders for trying to sabotage the Lisbon Treaty, it emerged today.
French president Nicolas Sarkozy, German chancellor Angela Merkel and Spanish prime minister Jose Luiz Rodriguez Zapatero were said to have been angered by the Tory leader’s positioning.
They expressed concerns during this week’s European Union summit in Brussels after Mr Cameron wrote to Czech president Vaclav Klaus, who has so far refused to sign the treaty, according to The Guardian,
The letter was sent earlier this month and outlined the Tories’ commitment to hold a referendum on the treaty unless it had been ratified by all 27 member states before they won power.
With the Czech Republic the last EU nation needed to sign the treaty, Mr Cameron’s initiative was seen as an attempt to embolden Mr Klaus to hold firm against ratification.