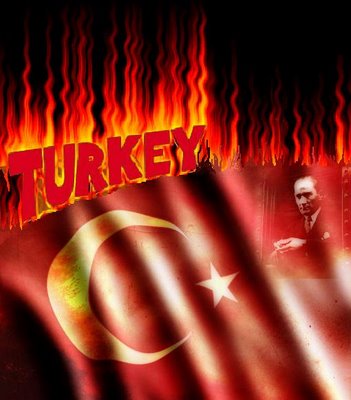 Kemal Atatürk ‘s hard work & dream dashed
A couple of years ago the Tundra Tabloids questioned a senior Israeli embassy official concerning Turkish relations with Israel, Dr.Daniel Pipes, who happened to be visiting Finland sat quietly by listening to the exchange. It was the TT’s opinion back then that not all was well, that while the Turkish military is still interested in keeping a good working relation with the Jewish state, the political leadership is of another opinion.
At the time, the Israeli military had bombed a Syrian nuclear facility that was patterned from a North Korean model, and that the Israelis had used Turkish airspace to carry out the attack with the military’s blessing, not the government’s. Daniel Pipes now illuminates for us the reasons as to why he thinks that Turkey has indeed taken a large step(s) away from the West and towards the Islamic Middle-East. KGS
Turkey: An Ally No More – by Daniel Pipes
“There is no doubt he is our friend,” Turkey’s prime minister, Recep Tayyip Erdoğan, says of Iran’s president Mahmoud Ahmadinejad, even as he accuses Israel’s foreign minister Avigdor Lieberman of threatening to use nuclear weapons against Gaza. These outrageous assertions point to the profound change of orientation by Turkey’s government, for six decades the West’s closest Muslim ally, since Erdoğan’s AK party came to power in 2002.
Three events this past month reveal the extent of that change. The first came on October 11 with the news that the Turkish military – a long-time bastion of secularism and advocate of cooperation with Israel – abruptly asked Israeli forces not to participate in the annual “Anatolian Eagle” air force exercise.
Erdoğan cited “diplomatic sensitivities” for the cancelation and Foreign Minister Ahmet Davutoğlu spoke of “sensitivity on Gaza, East Jerusalem and Al-Aqsa mosque.” The Turks specifically rejected Israeli planes that may have attacked Hamas (an Islamist terrorist organization) during last winter’s Gaza Strip operation. While Damascus applauded the disinvitation, it prompted the U.S. and Italian governments to withdraw their forces from Anatolian Eagle, which in turn meant canceling the international exercise.
As for the Israelis, this “sudden and unexpected” shift shook to the core their military alignment with Turkey, in place since 1996. Former air force chief Eytan Ben-Eliyahu, for example, called the cancelation “a seriously worrying development.” Jerusalem immediately responded by reviewing Israel’s practice of supplying Turkey with advanced weapons, such as the recent $140 million sale to the Turkish Air Force of targeting pods. The idea also arose to stop helping the Turks defeat the Armenian genocide resolutions that regularly appear before the U.S. Congress.
Barry Rubin of the Interdisciplinary Center in Herzliya not only argues that “The Israel-Turkey alliance is over” but concludes that Turkey’s armed forces no longer guard the secular republic and can no longer intervene when the government becomes too Islamist.
The second event took place two days later, on October 13, when Syria’s Foreign Minister Walid al-Moallem announced that Turkish and Syrian forces had just “carried out maneuvers near Ankara.” Moallem rightly called this an important development “because it refutes reports of poor relations between the military and political institutions in Turkey over strategic relations with Syria.” Translation: Turkey’s armed forces lost out to its politicians.
Thirdly, ten Turkish ministers, led by Davutoğlu, joined their Syrian counterparts on October 13 for talks under the auspices of the just-established “Turkey-Syria High Level Strategic Cooperation Council.” The ministers announced having signed almost 40 agreements to be implemented within 10 days; that “a more comprehensive, a bigger” joint land military exercise would be held than the first one in April; and that the two countries’ leaders would sign a strategic agreement in November.
The council’s concluding joint statement announced the formation of “a long-term strategic partnership” between the two sides “to bolster and expand their cooperation in a wide spectrum of issues of mutual benefit and interest and strengthen the cultural bonds and solidarity among their peoples.” The council’s spirit, Davutoğlu explained, “is common destiny, history and future; we will build the future together,” while Moallem called the get-together a “festival to celebrate” the two peoples.
More here.