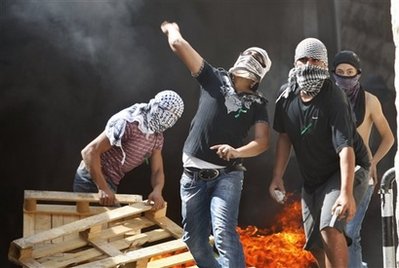 The AP of course chooses to headline the report by referring directly to the Israeli reaction, and not to what the Arabs did to cause the response by the police, who are trying to keep order in the area. KGS

Israeli police storm Jerusalem’s holiest site
JERUSALEM (al-AP) – Israeli forces stormed Jerusalem’s holiest shrine Sunday, firing stun grenades to disperse hundreds of stone-throwing Palestinian protesters in a fresh eruption of violence at the most volatile spot in the Holy Land.
A wall of Israeli riot police behind plexiglass shields closed in on the crowd, sending many protesters — overwhelmingly young men — running for cover into the black-domed Al-Aqsa mosque. The mosque is one part of the compound known to Jews as the Temple Mount and to Muslims as the Noble Sanctuary.
Dozens of protesters remained holed up inside the mosque for several hours, occasionally opening shuttered doors to throw objects at police. The Israeli forces did not enter the building, and the protesters eventually left peacefully and the compound was closed, police said. There were no serious injuries.
Israel’s national police chief, David Cohen, accused a small group of Muslim extremists of trying to foment violence — echoing a charge made by Israeli Prime Minister Benjamin Netanyahu two weeks ago.
“The police will act with a strong hand against anyone who disrupts order on the Temple Mount and against those incite to riot,” Cohen said.