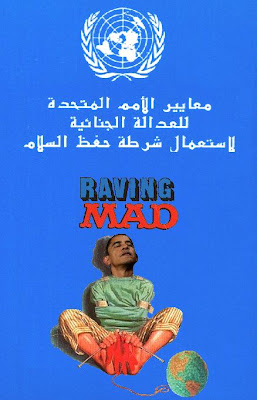 Obama: I am he as you are he as you are me
and we are all together
Middle East Lunatics Run Asylum; West Hands Them The Keys
By Barry Rubin
It’s bad enough that lunatics are running the asylum but to make matters worse they’re charging us rent! UN General Assembly chaired by Libya; EU chaired by Sweden; UN Human Rights committee run by Sudan. Iranian President Mahmoud Ahmadinejad received as a great statesman by the UN after stealing the election and repressing demonstrators. President Barack Obama’s speech in Cairo and at the General Assembly. Yep that about sums it up.
So let’s see what’s happening in the Middle East today….
There have been several days of Palestinian riots in Jerusalem based on a false rumor of some Jewish radical assault on the Temple Mount when it was just a group of French tourists visiting the area. Wild rumors and lies create violence and hatred.
Meanwhile, a meeting of the radical Islamist Movement in Israel was convening under the slogan “Al Aqsa Is in Danger,” rallying thousands. One of the movement’s leader—President Barack Obama take note—said in a radio interview that it was unacceptable for “an [Israeli] Ethiopian policeman, a Negro, would ask a Muslim for his identity card” at the entrance to the Temple Mount compound.
Massive criticism and protests over this racism? Muslim groups lambast the Islamists for displaying racial prejudice? Guess not. Instead, violent demonstrations were organized by Fatah, Hamas, and Hizb al-Tahrir based on an untrue rumor.
So what did Fatah do after it helped provoke riots? Why it ran to the UN and demanded it intervene to keep Israel from escalating the situation in Jerusalem. The request was made by PA “foreign minister” Riyad al-Malki, a veteran leader of the terrorist PFLP group, though he is no longer with them..
What a wonderful metaphor. First, attack Israel; then complain that Israel is aggressive and committing war crimes. Of course, that’s what Hamas did and the world has leaped to its defense, so maybe that works.
[Which reminds me, a couple of months ago I spoke at the Council of Europe in Strasbourg, France. The representative of some Muslim group asked, “Why should anyone give you any more credibility [that is, the Israeli position] than to Hamas?” He was being generous. Hamas clearly has far more credibility even with the Europeans.]
Which brings us to the European Union’s endorsement of the Goldstone Commission report. LINK Note that the EU’s membership as a whole will almost certainly not support serious sanctions against Iran (even if Britain, France, and Germany do). Also note that the Swedish foreign minister, who chairs the EU, refused to condemn an article in Sweden’s largest newspaper saying Israel deliberately murdered Palestinians to steal their organs.
Incidentally, you may think the Goldstone Commission report is just being criticized by some because it condemns Israel as having committed war crimes during the war in Gaza. Actually, if one totally ignores the specific topic, it is one of the most amazingly sloppy and irresponsible international documents I’ve ever seen. It is based on the unchecked testimony of Hamas officials and Palestinians who hate Israel, plus plagiarism from various reports by NGOs that have a roughly similar position.
There was no independent investigation or verification of facts. Compared to this, the Protocols of the Elders of Zion is a scholarly document.
But that doesn’t mean PA and Fatah and PLO leader Mahmoud Abbas is happy. Oh, no. He has committed the dreadful sin of “moderation” in Palestinian eyes and so must repent (hence one of the reasons for his role in provoking the riots).
What did Abbas do wrong? First, he stood next to Israeli Prime Minister Benjamin Netanyahu at the UN because President Barack Obama asked him to do so. And second he agreed to withdraw the PA’s being the main sponsor of the Goldstone resolution at the UN to accuse Israel of war crimes.
Why does he need to do anything? He can just let the EU do the job for him.
Not that Abbas is all “bad” from the radical standpoint that dominates Palestinian thinking. After all, he refuses to negotiate with Israel unless there is a total freeze of construction on settlements, despite the Palestinians accepting this in practice for 16 years.
And this is the man and movement that Nobel Laureate Obama would have us believe is about to make peace? He can’t even do a small favor for Obama, much less make the big compromises necessary for real peace.
So how do you win popularity? Well, Hamas knows. Firing rockets and mortars at Israel, breaking the ceasefire, and using civilians as human shields have brought it big international gains. Now, Hamas, according to a Reuters report, is “enjoying a wave of popularity” because it got 20 female prisoners released in exchange for a video showing that Israeli hostage Gilad Shalit is alive.
Get that? Minor acts of moderation make you unpopular so you must repent by organizing riots and escalating extremist rhetoric. Violence and punishing your own people makes you popular.
Welcome to the Middle East!
Read it all here. KGS