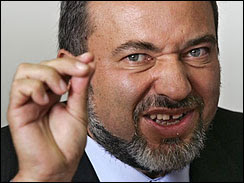 Avigdor Lieberman:
Norway is this far from being given the boot, they can place
their humanitarian record alongside Knut Hamsun’s Nobel award
The Norwegians love to highlight their humanitarian record as proof of how “just and noble” they are, in regards to the treatment of others (except of course to Green Peace activists trying to halt Norway’s massacre of the earth’s whale population)- So it must be particularly upsetting to them to be cast as an untrustworthy monitor to the conflict between the Arabs and Israel.
Truth be told, they’re Nordic hypocrites who love to lavish rewards and honors upon notoriously unhumanitarian people, all the while they claim sainthood to the pantheon (and anti-thesis of) human rights organizations, the UNHRC. What a bunch of hooey. While there are some Norwegians that do in fact “get it”, they’re a minority within that fantasy “human rights” supporting country. Norway has just been handed a warning.  KGS
Lieberman: Norway too ‘hostile’
to have monitors in Hebron

Israel should consider ousting Norwegian monitors from Hebron due to Oslo’s “hostility” toward Israel, Foreign Minister Avigdor Lieberman told the cabinet Thursday.
An overall reassessment of Israel’s relationship with Norway is needed, he argued, and expelling the monitors could be one element of this. The monitors are part of an international observer group, the Temporary International Presence in Hebron. TIPH was introduced into the city in 1994, by agreement between Israel and the Palestinian Authority, after Baruch Goldstein massacred 29 Muslim worshipers at the Cave of the Patriarchs in Hebron.
At a meeting last week with Norwegian Foreign Minister Jonas Gahr Store on the sidelines of the UN General Assembly in New York, Lieberman protested Oslo’s contacts with Hamas, as well as the celebrations Norway is sponsoring in honor of the 100th birthday of writer Knut Hamsun, who supported the Nazis during World War II. Of all the foreign ministers he met with in New York, Lieberman told the cabinet, this meeting was the most difficult, because “the Norwegians take a very hostile line against us.”
It may be the time has come to reassess our relations with them and reexamine our position on matters important to them, like their monitors in Hebron or [Israel’s] cooperation with the forum of donor states [to the PA], which they head,” Lieberman added.
Although TIPH also includes monitors from Italy, Sweden, Turkey, Denmark and Switzerland, Norway is the group’s principal supporter and is effectively in charge of it. The forum of donor states is involved in institution-building in the PA, and until now, Israel has cooperated closely with it.
Tension between Jerusalem and Oslo increased recently after Norway’s government pension fund decided to divest from an Israeli company, Elbit.

NOTE: Stefan comments to another post, but it’s on point here as well:
Absolutely to the point. Give the Norwegians the task to analyze their own anti-Semitism and they come up with nothing. This total lack of self-criticism and ability to recognize their blatant anti-Semitism makes their criticism about anything else void of any value. This issue was discussed elsewhere in this blog earlier (end of March) and the Norwegian arrogance was written all over the responses.
Israel’s foreign minister Lieberman has just suggested removing Norwegians from the TIPH force. A very good suggestion, I may say. I would rather see Syrian officials in their place. There is no difference between the Syrian attitude and Norwegian attitude towards Israel. Syrians just don’t pretend to be something else.
And, please, don’t tell me that I don’t know what I’m talking about. As an ex-Scandinavian living in Israel I can read and understand all the Scandinavian languages (except Icelandic). I follow the anti-Semitic (so called anti-Israel) outbursts in the Scandinavian media. I’m familiar with the anti-Israeli/anti-Semitic bias by the editors of news chats in major newspapers. For instance holocaust denial can be expressed freely, but you can’t comment it. The responses are removed by the editors (in major media). Decide by yourself to which category holocaust denial belongs.
So blatant anti-Semitism is part of Scandinavian culture and they think that is how it should be. That’s absolutely fine with me. I already left Scandinavia. But, please, at least be honest about it.
Stefan