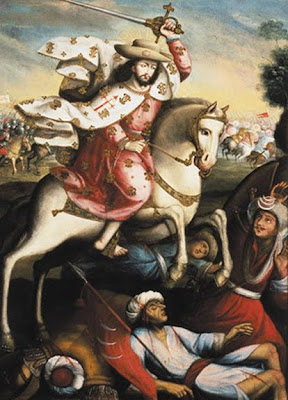 Courtesy of Winds of Jihad:

“The defeat of the Moors in 1492 and the expulsion of the Moriscos from 17th-century Spain has become a politically sensitive subject, with Osama bin Laden referring to it in repeated calls for the restoration of al-Andalus, the former Muslim kingdom in the Iberian Peninsula.”

Socialist Spain plans no celebrations for throwing out the Moors 400 years ago? 400 years of Mohammedan expulsion no reason to celebrate? WTF happened here?

NOTE: The article below is typical of the multicultural nonsense they want to push on Europe, where former colonizers are praised and their victims despised for throwing them out. Kind of like the government of the Congo apologizing to Belgium on the anniversary of King Leopold the butcher’s end of rule. KGS

Spain marks 400th anniversary of expulsion of Muslims
Madrid – On September 22, 1609, the regime of Spain’s King Philip III launched the expulsion of the country’s 300,000 Moriscos, as Muslim converts to Christianity were known. The first expulsion orders gave the Moriscos of the eastern region of Valencia three days to get to the nearest port, with no luggage other than what they could carry, after which delay they faced reprisals including death.
As Spain marks the 400th anniversary of the launch of the mass expulsion on Tuesday, it is widely regarded as an early example of ethnic cleansing and as a major loss that delayed the country’s development.
The government, however, is not commemorating the event that official Spain feels “uncomfortable” about, as novelist Juan Goytisolo put it. Muslims known as Moors ruled parts of the Iberian Peninsula from the 8th to the 15th century.
Contrary to popular belief, most of the Muslim conquerors and settlers were not Arabs, but North African Berbers (Amazigh), and many Spaniards of indigenous origin also converted to Islam.
Muslim Spain, which was known by the name of al-Andalus, was a beacon of high culture in medieval Europe, with its civilization peaking in the 10th century.
The weakening and divisions among Spain’s Moorish kingdoms facilitated the Christian reconquest of the country, which was completed with the defeat of Granada to Catholic monarchs Ferdinand and Isabella in 1492.