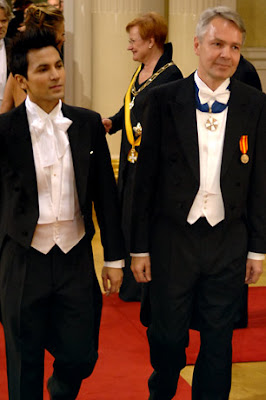 (Pekka Haavisto and Nexar Flores at the presidential ball)
Sending in the big gun
There are a couple of different angles to this buffoonish YLE story. First of all, believing that there are “moderates” within the religous supremacist, homophobic and wife beating camp of the Taliban, to negotiate a peace with, is, well, deranged thinking. And secondly, sending an openly gay politician to negotiate on behalf of the West, in a region where boys are routinely sodomized and openly gay men are butchered like sheep, is so ridiculous on so many levels that I don’t know where to begin.
Discussing about the stupidity of the situation with Vlad Tepes, the dinner scene from the movie “The Remains of the Day” came up in between laughs, which offers a unique window into the amateurish thinking of the day, prior to the outbreak of WWII. It’s the tundra Tabloids’ opinion that in some great measure, such rank amateurism has returned once again to the scene. Watch the video and then read the article below it, and decide for yourselves. KGS
Pekka Haavisto Proposed as Mediator in Afghanistan
Defence Minister Jyri Häkämies has proposed former EU Sudan special representative Pekka Haavisto as a mediator in the Afghan conflict. Speaking at the opening of a defence course, Häkämies said mediation in the conflict should be carried out under EU auspices.

Häkämies said a mediator should be able to talk with all sides in the country including moderate Taliban leaders. He believes Haavisto has this qualification.

Haavisto has, for example, served as the EU’s special representatives in the Darfur peace talks as well as in several U.N. missions. He is also a Green League MP.

“Someone is needed in Afghanistan who would be able to talk with not only various segments of the population, but also with moderate members of the Taliban. This would create conditions for stable development. There is now a need for stronger action by the EU and Finland should be active and propose solutions,” said Defence Minister Häkämies.

Defence Minister Häkämies expects that in the future, Finland will contribute more to the training of Afghan forces by offering training in Finland. According to Häkämies, the emphasis is shifting from military conflict management to civil crisis management. In Afghanistan, he said, this will require significant development of the country’s own security forces.