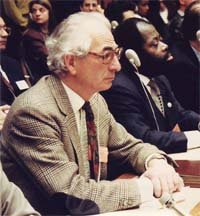 The Tundra Tabloids’ dear friend and colleague, David Littman, spells out in the following article, the central issues in regards to the Arab-Israel conflict. Mr.Littman explains the need for the international community to return to these facts to help address the ending of the conflict. One can’t expect a reasonable solution to the conflict without admitting the historical facts that have led to the present day situation.

The Arab myth and propaganda machine has been allowed to twist the historical record beyond all recognition, without any criticism from the international community as a whole. The IC has allowed such blatant revisionism to go uncecked, that one warped and factually challenged claim after the other, are allowed to become a part of the historical narrative no matter how ludicrous it may be.
No one challenged Arafat’s laughable claim that the Arabs are in fact related to the ancient Philistines, with the hopes of pinning their claim that they (the fakestinians) have been there for over 3000 years, which actually served to undermine their Arab ethnicity. The extinct Philistines were an Aegeatic people that migrated to the levant before the Children of Israel first stepped into the region.
H/T Pamela Geller
The Truth About the Mideast
Fourteen fundamental facts about Israel and Palestine.
By David G. Littman

It’s time to look back on 14 fundamental geographical, historical, and diplomatic facts from the last century relating to the Middle East. These basic facts and figures were stressed in recent statements to the U.N. Commission on Human Rights and its subcommission, to the surprise of representatives of both states and non-governmental organizations (NGOs).

1) After World War I Great Britain accepted the 1922 Mandate for Palestine, and then — with League of Nations approval — used its article 25 to create two distinct entities within the Mandate-designated area.