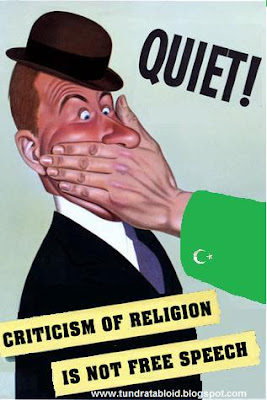 Helsinki District Court delivers
verdict to Jussi Halla-aho:You shall not insult Islam and its prophet!
It was to be expected. The Tundra Tabloids was asked just yesterday by someone living outside of Finland, what the outcome of the trial would be. Responding that it would be too close to tell, but the gut feeling however, was that most likely Jussi Halla-aho would receive a fine. That’s was indeed the case, as the District court in Helsinki fined the City Councilman to pay 30 day fines amounting to 330 euros. This judgement by the Helsinki District Court violates the very essence of what “Freedom of Speech” stands for; the right to say out loud, that, what people do not want to hear. As an American who has been living in Finland for the past 22 years, I’m appalled at what just took place. The Finnish judicial system just violated the sacred right of every Finn to speak his or her mind freely, on any given subject, no matter how polite or offensive that speech might be. From now on, and in no unclear or uncertain terms, the Finnish state makes itself the sole arbitrator of what kind of speech in Finland is permissible and what is not. Big Brother has spoken.Prosecutor, Simo Kolehmainen, Chief Prosecutor, Jarmo Kalske, Prosecutor Mika Illman, Minster of Justice, Tuija Brax, you all are traitors to your country, and for that the Tundra Tabloids holds you all in contempt. So, it is the personal opinion of the owner of this blog, The Tundra Tabloids, that the central figure of Islam, the person that Muslims revere and worship around the world and here in Finland, their “prophet Mohammad”, was in fact a pedophile by today’s standards, and it’s the continued intention of this blog to keep pointing out that fact, that the founder of Islam was indeed a pedophile, and that many of his faithful followers till this day, adhere to that institutionalized religious practice of Islamic inspired pedophilia. The Tundra Tabloids hopes that point was made clear. KGSNOTE: For more about the Jussi Halla-aho case history, click hereTrue Finns Councillor Fined for Defaming Religion

City Councillor Jussi Halla-Aho of the True Finns Party has been found guilty of defamation of religion by the Helsinki District Court. He was ordered to pay a fine of 330 euros. However, the court dismissed a charge of inciting hatred against an ethnic group. Prosecutor Simo Kolehmainen said Halla-Aho had publicly defamed the Islamic faith in his blog writings. Halla-Aho had also written derogatory statements about Somali immigrants on his internet site. The prosecutor said Halla-Aho’s writings insulted Muslims residing in Finland and endangered religious peace. The District Court ruled that in the indictment the claims (Halla-aho’s) were multiplied and by their reasoning were not designed to have a mature debate on grievances about Islam, but at the expense of the freedom of speech issue to discredit the religion’s values.Halla-Aho admitted to writing the comments but challenged they were intended to defame. He said the comments had been taken out of context added he was not guilty of any criminal offence. YLE

NOTE: Here is the video again of the Halla-aho interview just after the court trial ended on the 28th of August.