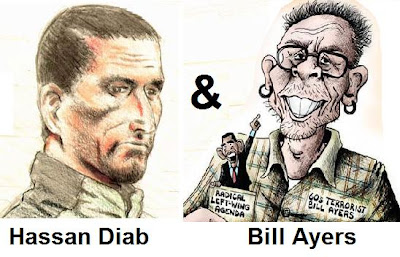 To the parents:Send us your big bucks and
the pliable minds of your childrenHassan Diab, a terrorist who is charged with the murdering of four people and the wounding of twenty others in a 1980 bombing attack against a Jewish Synagogue in Paris France, is set to teach a part-time introductory sociology course at Carleton University, for two days a week until the middle of August. What in the hell is the hiring staff at Carleton U thinking, in hiring this guy, before the trial?Are they making a statement that they believe he’s 100% innocent of the charges leveled against him, so lets hire him anyways, or that it’s all the same whether he’s guilty or not, it’s his teaching qualifications that matter most ? Un-freaking-believable, but sadly it’s the norm, not the exception to the rule in the academy, whether it’s in Canada or in the US.Just look how much the unrepentant terrorist Bill Ayers is a celebrated figure in the academy in the United States, all Diab has to do is get his lawyers to plea himself down to lesser charges and wait for a cushy teaching job once he’s released from prison. The Left loves its murderers, especially if they are unrepentant murderers. Just ask US president, B.Hussein Obama. Check out Pamela’s post on him as well. KGSH/T: Vlad Tepes
Ottawa prof charged in deadly bombing to return to university

OTTAWA — An Ottawa university professor charged in the deadly terrorist bombing of a French synagogue nearly 30 years ago is expected to resume teaching this week.

Hassan Diab, who is charged with murdering four people in the 1980 bombing, will begin teaching a part-time introductory sociology course at Carleton University two days a week until the middle of August.

Diab, whose strict bail conditions prevent him from leaving the house alone, will be required to travel to and from the university with his common-law spouse Rania Tfaily, an Ottawa court heard Monday.

But once at the university, Diab will no longer need an escort.

Diab’s lawyer, Rod Sellar, told an Ottawa court Monday Diab will be at Carleton teaching and meeting with students between 1:30 and 5:30 p.m. on Tuesdays and Thursdays, but the course may require him to go to the university almost daily.

Lin Moody, a spokeswoman for Carleton University, confirmed Monday that the school has hired Diab to teach for few weeks this summer. He was given a contract, she said, because of “an unforeseen leave” taken by the instructor who had originally been hired to teach the introductory sociology course.

Diab had taught a similar course before at Carleton, Moody said.

The 55-year-old Lebanese native, who became a Canadian citizen in 1993, has been under virtual house arrest since he was arrested late last year. Conditions of his bail require him to wear an electronic monitoring bracelet, obey a curfew, report to the RCMP regularly and not own a cellphone.

Diab and Tfaily were in court Monday to determine what items seized during RCMP raids of Tfaily’s condominium and her Carleton University office can be sent to French officials as potential evidence in their case against Diab.