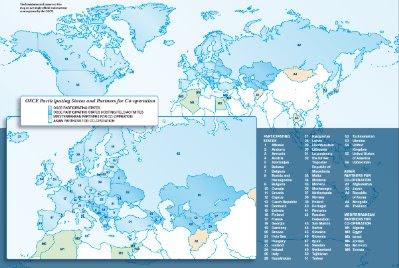 No meeting too small or too great will keep us awayThe Baron notifies of a new post that’s up at the Gates of Vienna, concerning the participation of a Counterjihad sympathizer at the recent Human Dimension Roundtable, in Vienna July 9-10, 2009 . It convened under the auspices of the Organization for Security and Cooperation in Europe (OSCE).Click the image above to see a full-sized map of the OSCE countries. At the bottom of this post is a list of those countries, as well as the mission statement of the OSCE. The original map of OSCE states (in pdf format) can be found here. Henrik Ræder Clausen has also posted a report on the same event.The Organization for Security and Cooperation in Europeand the CounterjihadA report from the Human Dimension Roundtable, ViennaJuly 9-10, 2009

One may wonder what the Counterjihad and an organization like the OSCE could possibly have in common. Before I delve into this matter, I will provide a short overview of the OSCE, as it is a rather obscure organization, especially for non-Europeans, despite the membership of the United States and Canada. I will also touch on how the OSCE processes work.According to its fact sheet, “The OSCE works for early warning, conflict prevention, crisis management and post-conflict rehabilitation. The Organization comprises 56 participating States that span the globe, encompassing three continents — North America, Europe and Asia — and more than a billion people.” However, the OSCE uses the “d”-word: dialogue. The fact sheet calls it its “genetic code, in order to maintain security throughout its region.”To be fair, the OSCE does its work in relative obscurity, “away from the headlines”, in order to defuse potential threats. The only time we hear about the OSCE is during elections, when monitoring missions are established, most recently in Georgia. The OSCE is also active in post-conflict areas, “helping to reinforce confidence- and security-building measures.” These measures include, among others, initiatives for minority rights, legislative reform, the rule of law, and press freedom.The OSCE, like the EU, believes in Euro-Mediterranean partnership which includes countries like Morocco, Tunisia, and Jordan for further cooperation. All partners for cooperation, save Israel, were noticeably absent from the roundtable discussions.