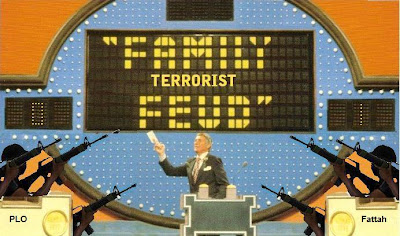 The way things will always be
in Fakestinian politics

Barry Rubin:“And these are the leaders and the group and the regime that U.S. and European policy depend on to make the tough compromises needed for peace with Israel? These are the shaky leaders and unstable organizations which much of the world is rushing to give control over a state? To paraphrase what they say in the movies’ legal declaimers: Any coincidence between the dominant Western analyses and actual Palestinian politics is purely coincidental. 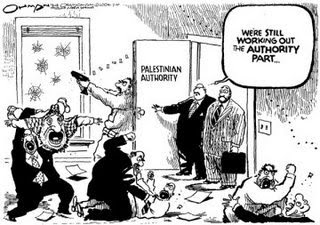 Presently, there is so much arrayed at the present US administrations plans for a comprehensive ‘peace settlement’ between the Arabs and Israel, that it’s almost comical. Barry Rubin has an interesting piece on a fracture developing within the Fattah itself. Israeli politicians have been correct all along, that there isn’t presently anyone within the Arab camp to negotiate with, they are all hell bent in fighting each other when they aren’t hell bent on fighting Israel. KGSMurder, He Said:
Palestinian Politics Fragments Further

Reality keeps impinging on the four main illusions regarding the Israel-Palestinian conflict, the ideas that: peace is possible in the not-distant future; that there’s a Palestinian negotiating partner which wants a two-state solution; that there’s a serious Palestinian negotiating partner capable of reaching and implementing an agreement; and that the failure to end the conflict is due to Israel.

Now we may be at the start of another Palestinian implosion, this time in Fatah, the ruling party of the Palestinian Authority (PA), and the PLO, the less-important but still existing Palestinian political umbrella group.

The latest development is a very public feud between Fatah leader and long-time PLO “foreign minister” Farouq Qaddumi, and PLO and PA head Mahmoud Abbas. With the word “moderate” endlessly—and exaggeratedly—applied to Fatah, it is easy to forget that the group’s perennial most popular leader is Qaddumi, a man who opposed and still openly opposes the Oslo agreement and a two-state solution.

Given this opposition, Qaddumi, unlike many other Fatah leaders, long refused to move to Gaza or the West Bank. It should be stressed, however, that Qaddumi could probably—if a conflict broke out—muster more support in the organization than the bureaucratic and uncharismatic Abbas. Indeed, the only real asset Abbas has is the Western aid which subsidizes the PA and, indirectly, Fatah and the PLO.

Qaddumi has now accused Abbas of murdering former PLO, PA, and Fatah leader Yasir Arafat, in partnership with Israel no less! Of course, Israel is often blamed for this even by supposedly “moderate” Palestinian leaders or intellectuals aligned with Abbas. The truth is that Arafat, who was always in poor health and never exactly a physical fitness fanatic, received poor medical care, further delayed by the movement’s refusal to deal with the reality of his illness.

Let’s pause here for a moment. If Palestinian leaders lie about each other so shamelessly, shouldn’t Western journalists, politicians, and human rights’ groups consider how much more of an incentive they have to lie about Israel? Israel is accused of all sorts of misdeeds based on statements by Palestinians who view such lies as part of their propaganda effort. Shouldn’t that be taken into account and such claims discounted without hard proof?

Let’s return, however, to the Palestinian political action. Why this feud between the two top non-Islamist Palestinian leaders?

Remember to read it all here, and visit Rubins’ blog often, you don’t find such great analysis on the Middle East being delivered on such a steady pace as at Rubin Reports.