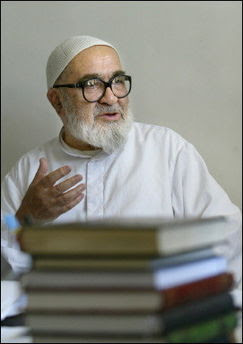 Grand Ayatollah Hossein Ali Montazeri:
I just want what’s best for Islam
and for my wallet

In reality though, it’s a fight between the ruling clique of highly corrupted and very wealthy Mullahs/Ayatollahs that back the status quo (Montazeri’s & Mousavi’s peeps)…and the Mullahs/Ayatollahs that support Ahmadinejad’s quest to return Iran back to the revolutionary Islam of the late Ayatollah Khomenie. Any other voice inside Iran calling for something else, like real freedom and liberal change to bring Iran into the 21 century, are mere sideline distractions to what really is taking place.
No doubt that there are thousands, if not tens of thousands of people wanting to rid themselves of the tyrannical Islamic regime, and have been marching in the streets, but the real power struggle going on presently is between these two camps of Mullahs and Ayatollahs, and their attention is on each other, not on the protesters for liberal change. The Tundra Tabloids seriously doubts Montazeri’s concern for “injustices”, he’s just afraid of losing his cut in the ruling elite’s raping of the Iranian economy. KGS
Grand Ayatollah Montazeri’s Fatwa

[TEHRAN BUREAU] In a very important development, Grand Ayatollah Hossein Ali Montazeri, the most senior cleric living in Iran, and one of the top two* marja’ taghlid (source of emulation) in Shiite Islam, issued a series of Fatwas, calling the Supreme Leader illegitimate and saying that he was working with the government against religion. Montazeri has called on people to take action against this injustice, even if they have to pay a heavy price for it.

Ayatollah Motazeri, who has long been one of the most outspoken critics of Iran’s hard-liners, issued the Fatwas in response to a letter that Dr. Mohsen Kadivar, a progressive cleric and a former student of his, wrote asking for answers to several pointed questions. (Dr. Kadivar was jailed a few years ago for his outspoken criticism of the hard-liners and now lives in the United States.)

The letter congratulates the Grand Ayatollah on the occasion of last week’s anniversary of the birth of Imam Ali, the Shiites’ first Imam, and a cousin and a son-in-law of the Prophet Mohammad. The letter says that the anniversary has fallen at a time when peaceful protests against rigged elections have been met by injustice by the government, which has resulted in tens of deaths, hundreds of injured, and thousands of arrests — all carried out in the name of Islam and Shiism by those who use Imam Ali’s name but take the path of his enemies instead.