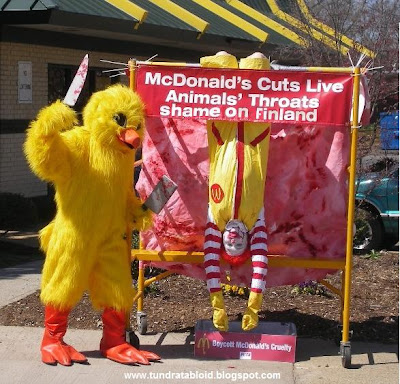 Butchered to a foreign god

Though the Christian faith allows the eating of meat sacrificed to foreign gods, no one is forcing Christians to eat meat sacrificed to the moon god allah. What the Tundra Tabloids finds interesting, is the fact that McDonald’s Finland, hid the fact that its chicken meat served to its Finnish customers, has been slaughtered according to the Islamic ritual slaughter system (Ḏabīḥah) to render the meat Halal, or fit, for Muslim consumption.
It’s the Islamic rip-off version of the more well monitored and thorough Judaic system of ritual slaughter of animals, (shechita) which renders the meat Kosher under Jewish dietary laws….which are never, by the way, ever forced upon an unknowing public. I first caught wind of the story from the Finnish Lutheran Church’s own paper, Kotimaa, which curiously enough, is not running the story on its online version of the paper. Special thanks to that special someone for the heads up on it. KGS
Finland’s McDonald’s chicken
slaughtered according to Islamic ritual

Nordic McDonalds are using a Danish Lantmän’s Danpo produced chicken. Danpo slaughters chickens according to the correct Islamic manner, as the company’s products are exported to many Arab and Muslim countries.

In traditional halal slaughtering, the animal’s head turned by a Mekkaa and carotid artery is cut from the animal which is conscious. At the same time, pronouncing a prayer. In EU countries, the animals are stunned before slaughter. In an interview published in Kotimaa, Finnish McDonald Quality Manager Tiina Partanen says that the method used by the restaurant chain’s subcontractors is not a traditional halal slaughter, because the animals are stunned before.

The slaughter is overseed by a Muslim employee who submits aprayer “Allah, Allah is the greatest” at the beginning of the slaughter, and every time when the process is interrupted.

Partanen is not taking a position on whether Finnish customers have a right to know they’re eating chicken, which at the time of slaughter have an Islamic prayer uttered over them.

“I think the relevant information is that the chicken is slaughtered in the normal slaughter process. The animals are stunned before the killing. “

According to Partanen, Finland McDonald’s beef is not halal slaughtered.

NOTE: There has been a lot of blow back from Finnish Christians to the original article (not online), and many are calling for a boycott of McDonald’s due to being fooled and having meat served them sacrificed to a foreign god.