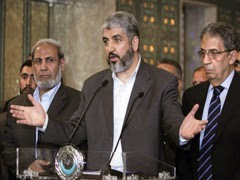 Meshaal: But it’s a deal ain’t it?
A few things are for certain where the Palestinians are concerned. They can never be counted on to be an honest broker for peace, nor to ever give up on their own perceived rights to kill Jews, as well as their ability distort reality beyond comprehension and to speak of their demands with a straight face, even though their claims are so absurd it almost reeks of bad comedy.

Chairman of Palestinian Hamas Movement Politburo, Khalid Meshaal, has now come out with his genocidal movement’s deal for Palestinian unity, now that the US administration is decidely in favor of rappoproachment with the terrorist organization Hamas. Yes the Tundra Tabloids knows that Obama hasn’t said it yet, but his diplo speak has made it clear, that Hamas will be approached in the near future if they tame their rhetoric down. KGSI like David Frankfurter’s analysis of the recent Hamas declaration:

Meshaal: Hamas is ready to positively deal with any opportunity
to achieve a political accord that maintains the Palestinians national rights

Damascus, (SANA)- Chairman of Palestinian Hamas Movement Politburo Khalid Meshaal has said that the movement is ready to positively deal with any possible opportunity to make the political efforts a success to reach a political accord that maintains the Palestinians national rights.
In a press conference following his meeting with Arab League Secretary General Amre Moussa on Tuesday evening, Meshaal added “Any accord among the Palestinians should emerge from agreeing on resisting the Israeli occupation and enabling the Palestinian people to self-determination right and building their independent state. He called on for neutralizing the Palestinian national dialogue, keeping it off the American and Israeli conditions and unifying the Palestinian establishments which pave the way for formation of a Palestinian national unity government. He pointed out that the Palestinians are waiting for bringing US President Barak Obama’s new words regarding the Arab-Israeli conflict to reality through forcing the Israeli most extremist government led by Benjamin Netanyahu to commit itself to freezing settlements in the West Bank Meshaal concluded by saying that the Arabs, all together, have offered tangible steps toward achieving peace in the region and the international community should ask Israel to play its role by adopting serious steps in this regard.